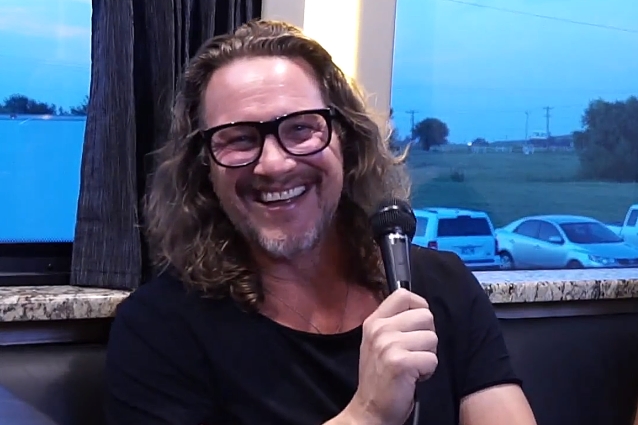 CANDLEBOX Vocalist KEVIN MARTIN: 'I'm Not Sure How Much Longer I'll Do This'

CANDLEBOX vocalist Kevin Martin recently spoke with Jay Ramone of the Oklahoma City, Oklahoma radio station Rock 100.5 The KATT. The full conversation can be viewed below. A few excerpts follow (as transcribed by BLABBERMOUTH.NET).

On the group's current tour, which celebrates the 25th anniversary of their quadruple-platinum self-titled debut album:

Kevin: "I'm having fun with it. It's going well. I still just can't comprehend — it's still kind of sinking in that that record's 25 years old. It's one of those things that you just... you hope when you start a band when you're a kid that something's going to take, and it took, and it's still taking to this day. It's crazy to me, and I couldn't be happier. It's still sinking in."

On the group's recent shows in their Seattle hometown, which featured the band's original lineup:

Kevin: "The first one sold out in 15 minutes. We had people come in from Japan, Malaysia, South America, Australia, South Africa, England, Spain, Italy, Mexico... like, all over the world. I never thought that record reached that far. We've never been to Malaysia. We've never been to Japan proper. We did Spain back in '94 and Europe a couple times, but nothing to really solidify the band, so it was really kind of shocking. That's why I say, I'm still kind of pinching myself. To sell out two shows in Seattle, our hometown, with the original guys, which was a treat in itself. We love one another, but they have real jobs. I don't — I sing in a rock n' roll band. It was exciting. It was an absolute blast. It was nerve-wracking leading up to the dates, the two rehearsals we had before. I don't think we knew what to expect until that first note was played, and then of course it was like riding a bike. Your foot slipped off the pedal every now and then, but we got it right in those rehearsals so that when the shows took off, they were magical."

On whether he's ever considered making a country record or writing for country artists:

Kevin: "I might write for somebody — I might write a country song for somebody — but I could never pull off a country record. I'm not that kind of person. I'm not a truck-driving, beer-drinking, dog-loving man. I'm just not that — it's not in me. And I don't particularly like country music. I love outlaw country, classic country — George Jones, Johnny Cash, Waylon [Jennings], Willie [Nelson] — but I'm not a big fan of contemporary country. It's just not really up my alley."

Kevin: "We'll release a record next year. We were trying to figure out a schedule in September [and] October to record. We've got kind of these sparse [live] dates which are taking up most of our time, and we're still waiting for the label to give us a budget. We'll release vinyl. We're trying to release all the CANDLEBOX records on vinyl next year. It's a bit of a pain in the ass with Warner Brothers — they don't want to really release the rights. When you go to vinyl, you have to remaster for vinyl, and they're kind of against that, so we're arguing with them, and hopefully we get allowance to do that. I don't really know how much longer I'll do this. I'm 49, and as much as I love it, I really miss my family and my wife and my son a lot. Singing the way I sing, it's a lot for me to do four or five nights in a row or go out for six weeks. I'm not a singer that sings basic stuff all night long. I move around a lot vocally, and I would hate to get to the point where — as much as I love Robert Plant — I don't want to not be able to hit those notes. I'll give it a couple more years — maybe until I'm about 55."

CANDLEBOX released three albums on Maverick Records between 1993 and 1998 before breaking up in 2000. The band reformed in 2006 and has since released three additional studio albums, the most recent of which, "Disappearing In Airports", surfaced via Pavement Music in 2016.