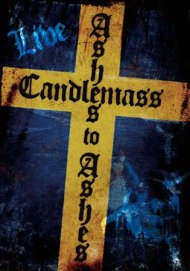 Swedish doom metal legends CANDLEMASS will release a new DVD, "Ashes To Ashes - Live", in North America on June 29 via Nuclear Blast Records (April 23 in Europe). The set will contain footage of the band's performance at last year's Sweden Rock Festival in front of 30,000 people as well as CANDLEMASS' entire October 2009 concert in Athens, Greece. The DVD will be released as a CD+DVD, with the Sweden Rock show as the audio CD. For the die-hard fans, Nuclear Blast is putting two sets of double vinyl together (one set Sweden Rock Festival, one set Athens),limited edition 1,000 copies each.

"Death Magic Doom", the latest album from CANDLEMASS, debuted at No. 79 on the Top New Artist Albums (Heatseekers) chart, which lists the best-selling albums by new and developing artists, defined as those who have never appeared in the Top 100 of The Billboard 200.

CANDLEMASS bassist/songwriter Leif Edling previously stated about "Death Magic Doom", "The songs [on the new album] are about immortality, depressions, demons, vampires, funerals and the almighty devil that we all know very well. I love the way we perform here. Rob's singing and Lasse's [Lars Johansson, guitar] soloing are nothing but amazing!! The production is also outstanding! The name 'Death Magic Doom' captures it perfectly! Great name! Love it! It is very suitable for an album of this magnitude AND it also describes what CANDLEMASS is about; Heavy, hard, epic, colossal metal!!! I would say that 'Death Magic Doom' is the best album we have done since 'Nightfall' [1987]!! In all, [the LP contains] nearly 50 minutes of bone-crushing and mind-blowing doom metal!!"

CANDLEMASS was among the five final nominees that competed for the "Best Hard Rock" honor at the Swedish Grammis awards, which was held January 15, 2010 at Münchenbryggeriet in Stockholm. The bands are all nominated for their most recent releases, all of which came out during 2009.