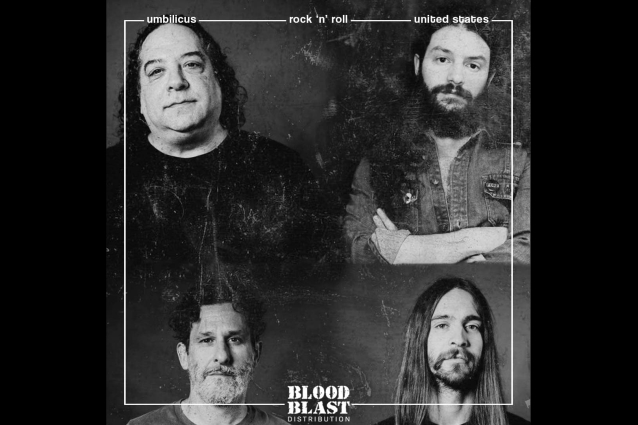 Nordberg said: "We are all so excited to finally start releasing some music from this band! I have worked with Blood Blast Distribution with several other bands, and they are absolutely killer to work with. Pro, great communication, and they care about the artists. Our first single should be out this month, so stay tuned!"

Regarding how UMBILICUS came together, Mazurkiewicz told Extreminal in a 2021 interview: "20 years ago when [Jack Owen] was still in [CANNIBAL CORPSE], literally 20 years ago, he and I started a side project and we wrote some original songs and we played two shows here in Tampa in a small bar. The name of the band was PATH OF MAN. And we wrote about 15 songs, we made a couple of demo tapes. But we didn't really do anything with it. We played two shows and then the band fell apart. It was three of us. We had a singer, another friend of ours, a friend of mine, Vernon Blake. That was 20 years ago. It lasted a year maybe. [It was] a lot of fun and [then it] fell apart. Right around May or June [of 2020], I said, 'You know what? Now is the time to [do it] if I wanna do this again. Now is the time to do it because CANNIBAL CORPSE is finished recording the new record.' I had some time on my hands. So I called my friend Vern who played bass on that project and I said, 'Hey, you wanna start a project back up again? Let's do this.'"

As for the musical direction of UMBILICUS, Paul said: "[It is] a total kind of hard rock project. More of a rock and roll, hard rock kind of stuff. Stuff that I was grew up with — the late '60s, early '70s kinda stuff."

On the topic of how he found the other musicians for UMBILICUS, Paul said: "Jack wasn't gonna get involved in this. He doesn't live in Florida anymore, so we had to start fresh. We're, like, 'Let's start fresh,' Vern and I. 'Let's find a guitar player.' And we found a guitar player. He's the guitar player that plays in THE ABSENCE right now and INHUMAN CONDITION. They just released a CD, a smaller band, but his name is Taylor Nordberg. He is playing the guitar with us right now. We're trying to make this project go a little farther than we did the last one."

Mazurkiewicz went on to say that UMBILICUS had "10 songs written. Our plan is to get this music out to the masses," he said. "We definitely wanna get it known. We wanna get something out there to see what can happen."

When UMBILICUS's formation was first announced last December, Mazurkiewicz said in a statement: "UMBILICUS was formed in the summer of 2020 and driven by our love of rock and roll from the late '60s, '70s and early '80s.