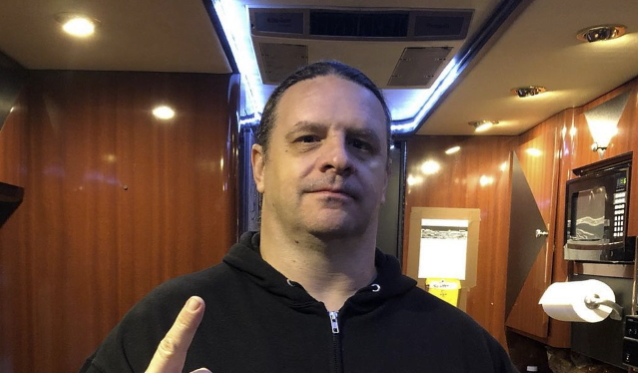 During an appearance on "Vox&Hops", the podcast hosted by Matt McGachy, frontman of extreme metal band CRYPTOPSY, CANNIBAL CORPSE singer George "Corpsegrinder" Fisher opened up about his recent weight loss and how it has affected his live performance.

"Four days after my birthday [in July 2021], my wife had started doing Weight Watchers [now called WW after a rebranding in 2018], and so I decided, 'I'm gonna do it too,'" he said (as transcribed by BLABBERMOUTH.NET). "And so far… I probably gained back another five or 10 pounds from the holidays, 'cause while you're sitting there drinking those beers, you're also eating a couple of holiday cakies and stuff. So a couple of more pounds went back on. But at one point, I was, from four days after my birthday, I was down 47 pounds."

In the interview, which was taped before the launch of CANNIBAL CORPSE's February/March 2022 U.S. tour, the 51-year-old vocalist continued: "So that's another thing I did in the off time. I just decided to dedicate it to Weight Watchers. It worked for me, and it worked for… My daughter and my wife were doing it as well, my oldest daughter. So I'm still doing it now. And I'm hoping that before we get on this next tour I can drop more pounds. Because I know that when we [played at the Psycho Las] Vegas [festival last August], I probably had lost about 25 pounds, and I could tell on stage. Even though we hadn't played in a while — we hadn't played a show in over a year — I could still tell that I lost weight. I felt better [and] I felt stronger."

Fisher added: "So we're starting this tour in February, and I'm hoping I can drop another 15 [pounds] and be past the 47 [that I had lost before]. 'Cause I'm probably down about 35 pounds now [from before I started the Weight Watchers program], which is still a lot. When I [started] this diet, I was 309 pounds [approximately 140 kilograms]. 'Cause I know how much better it made me feel, as far as being on stage. I'm not getting any younger, so you've gotta take of yourself. And I really feel that it helped me."

Fisher has spent the last couple of months promoting his debut solo album, "Corpsegrinder", which was released on February 25. The 10-song effort was co-produced by Nick Bellmore (DEE SNIDER, KINGDOM OF SORROW) and Jamey Jasta (HATEBREED) and was made available through Jasta's new label, Perseverance Music Group. One song on the LP, "Acid Vat", features a guest appearance by Fisher's CANNIBAL CORPSE bandmate Erik Rutan.

CANNIBAL CORPSE's 15th studio album, "Violence Unimagined", arrived in April 2021 via Metal Blade Records. Rutan, one of the death metal's most acclaimed guitarists who is known for his time as part of MORBID ANGEL throughout the '90s and early 2000s, as well as handling vocals/guitars for HATE ETERNAL, lent his guitar as well as production skills to the effort, which was recorded at his Mana Recording in St. Petersburg, Florida. Rutan previously produced four CANNIBAL CORPSE albums (in addition to "Violence Unimagined"),alongside the likes of GOATWHORE, SOILENT GREEN and BELPHEGOR. Filling in live on guitar since 2019, in 2020 he became a full member, contributing to the writing process.