CANNIBAL CORPSE To Release 'A Skeletal Domain' Album In September

Regarding CANNIBAL CORPSE's decision to record "A Skeletal Domain" with producer Mark Lewis (ARSIS, THE BLACK DAHLIA MURDER, WHITECHAPEL, DEVILDRIVER, DEICIDE, SIX FEET UNDER) at Audiohammer Studios in Sanford, Florida, CANNIBAL CORPSE bassist Alex Webster recently told Metal Wani: "We've done three records [2006's 'Kill', 2009's 'Evisceration Plague' and 2012's 'Torture'] with Erik [Rutan, HATE ETERNAL] and all three of them turned out incredible; we're so happy with the production. But at the same time, we haven't worked with a different producer since 2003, when we worked with Neil [Kernon] on 'The Wretched Spawn'. So, really, when you're in a career for a long time, like we are, occasionally changing the people you work with, or changing the location of where you're working, can just help you feel more motivated to work, really. And we thought, 'OK, we've done these three records with Erik that were so successful, he did such a great job, but let's leave it at that for now, and maybe try working with Mark.' Since their studio is also very close to us. Both Erik and Mark's studios are down here in central Florida. So we figured, why not give it a try? Just to do something a little different; we'll see. But we would not rule out working with Erik again. He's awesome and we consider him a brother of the band, so working with Erik Rutan could certainly happen again in the future."

On the topc of how the new CANNIBAL CORPSE material is sounding, Webster said: "I think it's turning out to be kind of a dark-sounding album. Which, you know, it's a death metal album, so, of course, it should be kind of dark and eerie sounding anyway, but I think this one a little more than normal. That was kind of the direction the songwriting went in. Pat [O'Brien, guitar] actually wrote a lot on this album. This will be the first album where Pat wrote more songs than anyone else. He's really been super motivated, and he's been writing some great, great material that we're all really excited about. And some of it, it's very evil-sounding stuff. So I think our fans will be very happy. There's nothing on here that's even a million miles close to being a sellout, you know what I mean?! It's definitely full-on evil death metal. I think everyone will enjoy it."

CANNIBAL CORPSE's twelfth studio album, "Torture", sold 9,600 copies in the United States in its first week of release to debut at position No. 38 on The Billboard 200 chart. The band's previous CD, "Evisceration Plague", also opened with 9,600 units to land at No. 66. That was more than 50 percent higher than the opening tally of CANNIBAL CORPSE's 2006 CD, "Kill", which entered the chart at No. 170 after shifting more than 6,000 copies.

Metal Blade Records last year released picture discs from the band's expansive catalog of releases ("Eaten Back To Life", "Butchered At Birth", "Tomb Of The Mutilated", "The Bleeding", "Vile", "Gallery Of Suicide", "Bloodthirst", "Gore Obsessed", "The Wretched Spawn", "Kill", "Evisceration Plague", "Torture"). A total of 12 pictures discs were released, covering all of the band's full-length studio albums, some of which had never been released on picture disc. 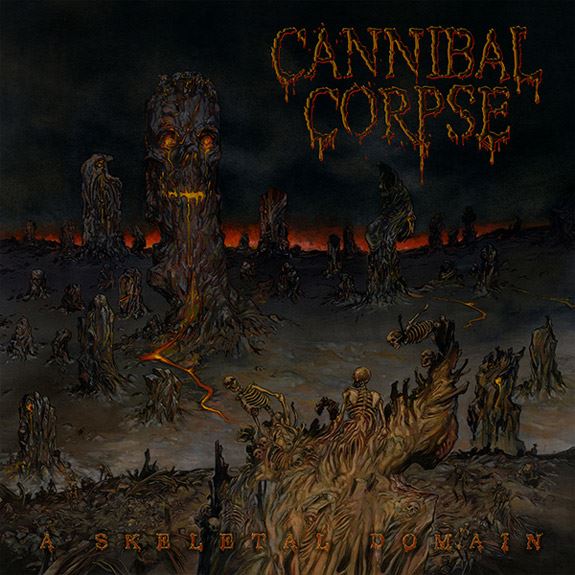