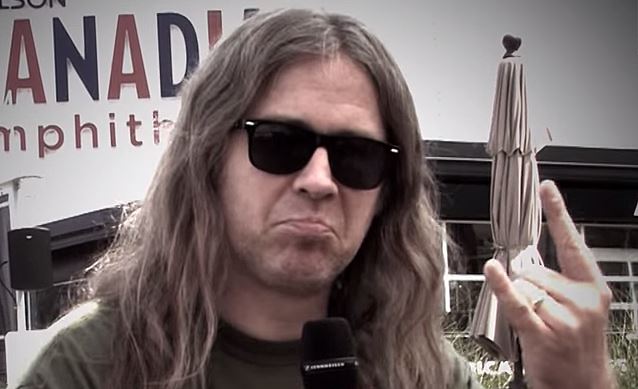 In a brand new interview with Ghost Cult magazine, bassist Alex Webster of Florida death metallers CANNIBAL CORPSE was asked how hard it is for the band to keep from recycling its own material thirteen albums into the group's career. "That can definitely happen," he said. "What we try to do is avoid that — it's a conscious effort. If I write something and it reminds me too much of something from the past, I'll make a conscious effort to change it.

"One thing that is very helpful in this band is that we have more than one or two songwriters. We have four guys in the band who contribute to the songwriting process. You end up having a lot of different ideas, and good variety from song to song. I think that's one of our biggest strengths. It's not a band with one songwriter, and I think this album really puts that on display, our division of songwriting duties."

Regarding whether he has ever found the limitations of death metal restricting and if he has ever been tempted to follow his technicality beyond those genre restrictions, Webster said: "We definitely want to stay a full-on death metal band; that was part of the initial objective of this band, to be the best death metal band we could be, and we don't want to really go beyond the boundaries of death metal, but we are looking for things that we haven't done before.

"There are certain things that we wouldn't have done in the past but we will do now. For example, in the earlier part of our band's career — or more about the middle, I should say, around 'Gallery Of Suicide' — we avoided anything that sounded thrashy. The gallop-type picking, things like that, and we've really stopped avoiding that recently.

"We're a death metal band, but thrash is part of our background, you can hear it certainly in our earlier albums — 'Eaten Back To Life' is a very thrashy album, and there are certain elements of thrash throughout our earlier stuff, and we just haven't made any effort to avoid that for the last couple of albums. We thought, why bother — if it's something that sounds really heavy, why not use it? We felt like there was no reason why a death metal band couldn't have those intricate picking rhythms — it's a particular sound of thrash, but if you've got guitar players who are good enough to do it, why not do it? We've added more of that over the last few albums, and I think it's added really seamlessly into the overall death metal sound that we have.

"We're willing to try to add certain outside influences as long as they work well with our sound, and don't make us sound less death metal."