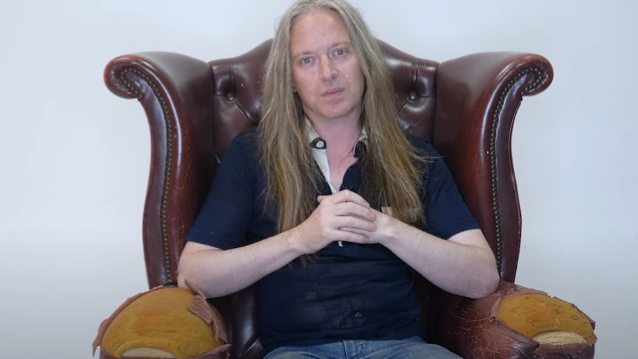 CARCASS's BILL STEER: 'I Didn't Experience The World Of Real Work Until My Mid-20s'

Bill Steer of British extreme metal pioneers CARCASS spoke to the "Everblack" podcast about the various non-music related jobs he has held over the years in order to support himself when he wasn't on tour. He said (as transcribed by BLABBERMOUTH.NET): "I left school at 16. I was already playing in bands around that time, and I guess by the time I was 17, I was doing NAPALM [DEATH] and CARCASS. I didn't experience the world of real work until my mid-20s once CARCASS had broken up. That was quite an education. Looking back, it was long overdue 'cause I just didn't have enough experience of the real world and people. 'Cause if you'd just been in your little music bubble, only kind of hanging out with and dealing with people who like similar music, it's a very narrow view of the world."

He continued: "[I ended up doing] everything you could possibly do that's low paid with low commitments. I didn't stick with any job for that long. I think initially I was working for a wine merchant. That went on for — I don't know — how many years? And then there was the odd thing like taking Saturday jobs in second-hand record shops. Probably the best stuff I did in terms of something that was kind of rewarding would have been working with younger people with learning disabilities down in south London. That just gave me a reality check, as it were. It's very hard to feel sorry for yourself about your situation when you're around people who can't do many things themselves. So it was a really good education. And then right before [CARCASS] reformed, I think the last two or three years, I was working for my friend's company in his warehouse. So I had a good situation there. If FIREBIRD had a couple of gigs or a little tour somewhere, I just had to tell him and I could go. But for the most part, I had a full-time job there. And that was actually loads of fun."

CARCASS's latest album "Torn Arteries", was released in September via Nuclear Blast Records. Drummer Daniel Wilding did session work in Sweden at Studio Gröndahl with David Castillo while guitars were recorded at The Stationhouse with James Atkinson in Leeds, England. Eventually needing some form of residential location to finalize vocals, bass, and other guitarwork, the band headed back to Studio Gröndahl in Sweden to continue work in a very relaxed atmosphere with Castillo.

CARCASS played its first pandemic-era concert on November 6, 2021 at the Damnation Festival in Leeds, U.K.