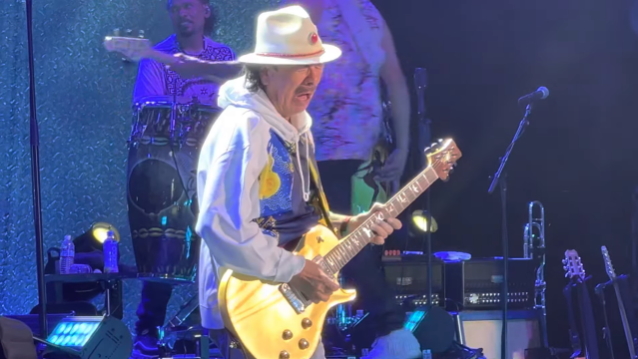 Carlos Santana collapsed onstage during a concert Tuesday night (July 5). The legendary guitarist was overcome by the heat about 40 minutes into his concert at the Pine Knob Music Theatre in Clarkston, Michigan and suddenly stopped and fell to the stage. The lights then dimmed as the 74-year-old musician was attended to by medical staff. After several minutes, a crew member came on stage and addressed the audience.

"Ladies and gentlemen, as you can see, we have a severe medical emergency," the staff member explained. "Let's share our prayers… We need it right now… Please send your light and love to this man."

According to Variety, Santana was seen waving to fans as he was taken offstage.

A representative for Santana later released the following statement regarding his condition: "Rock Legend Carlos Santana was over-taken by heat exhaustion and dehydration during a concert Tuesday (July 5) evening in Michigan. The guitar great was taken from his show at Pine Knob Music Theatre (formerly DTE Energy Music Theatre),an outdoor amphitheater in Clarkston, some 40 miles northwest of Detroit, Michigan. Carlos was taken to the emergency department at McLaren Clarkston for observation and is doing well, it was announced by Santana's manager Michael Vrionis tonight."

A short time later, Santana shared an update via his official Facebook page. "Thank you for your precious prayers," he wrote. "Just taking it easy. Forgot to eat and drink water so I dehydrated and passed out. Blessings and miracles to you all."

As a result of Santana's medical episode, Wednesday night's (July 6) show at The Pavilion at Star Lake in Burgettstown, Pennsylvania will be postponed to a later date.

Santana is currently on the road with EARTH, WIND & FIRE as a part of the "Miraculous Supernatural" tour.

Carlos is continuing to promote his latest album, "Blessings And Miracles", which was released last October via BMG. The record's first single, "Move", saw the music legend and guitar icon reteamed with MATCHBOX 20 singer Rob Thomas.

Carlos Santana waved to clapping fans as he’s helped off the stage pic.twitter.com/YA55N4QCZe