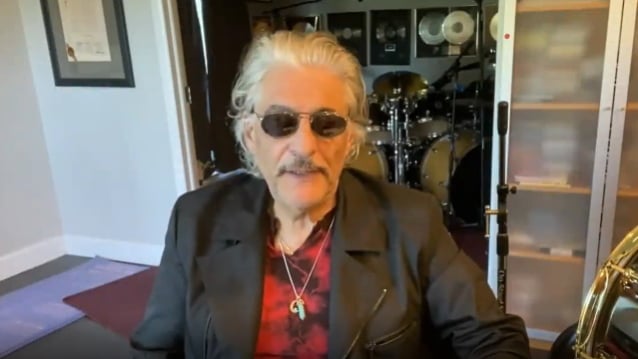 During a January 9 appearance on SiriusXM's "Trunk Nation With Eddie Trunk", drummer Carmine Appice discussed the possibility of a reunion of the power trio/supergroup BLUE MURDER. The band was formed by guitarist/vocalist John Sykes and released two studio albums — 1989's self-titled effort and the 1993 follow-up, "Nothin' But Trouble" — before calling it quits.

Asked by host Eddie Trunk if he thinks Sykes is "done" playing music, Carmine said (as transcribed by BLABBERMOUTH.NET): "I think he's done. I send him texts; I don't hear nothing back. I don't know. Maybe he's pissed off at me for some reason. But I talk with [BLUE MURDER bassist] Tony [Franklin]; he hasn't heard from him either.

"Tony said [John] just don't like the business now, the way the business is," the 76-year-old drummer continued. "He'd rather do nothing. That's what Tony told me. But we can go play, the band. When we rehearsed a few years ago, it was like magic. And then it just didn't happen. It was just tremendous, the three of us playing together again. It was really tight. We'd say, 'Hey, let's play 'Valley Of The Kings',' and we did it. Now, unfortunately, our keyboard player, Nik [Green], passed away [in 2016]. But we can get somebody else to play keyboards.

"I would love to do some shows with Sykes and Tony as a trio with a keyboard player," Carmine added. "We used to call it 'the trio with depth.'"

Asked how long ago he, Sykes and Franklin last rehearsed together, Carmine said: "It was four years ago, maybe — five years ago. Yeah, [we were rehearsing because we were planning] to do shows. And it just didn't happen.

"When [Sykes] got out of THIN LIZZY, that was supposed to be because we were gonna do shows. And we had shows in Europe booked. But something happened with him and the management; something happened. I forgot what it was. So all the shows got blown out. We had some of the big festivals over there. That would have been the start of it. He left THIN LIZZY, from what I understood, so we could do BLUE MURDER. 'Cause THIN LIZZY was, like, he was in it for a while, he was doing stuff, but he didn't play on the big records. But BLUE MURDER was his; we created it. And it was something that I felt was never completed. It was a great band. Unfortunately, when it came out, for some reason it didn't do what it was supposed to do. And then grunge came in and kind of killed the whole idea. Too bad."

Three years ago, Carmine told "The Blairing Out With Eric Blair Show" at the NAMM show in Anaheim, California that "people wanna see [BLUE MURDER play again], but we can't get John out of the house."

He continued: "I saw John [in 2019] at the Heavy Metal Hall Of Fame, and he told me he was going out with Tony and this little kid drummer [Fred Boswell Jr.]. And he said, 'The kid wants to meet you,' and I met him. He said [his solo] album's coming out, and they're gonna tour. And I said, 'Good. When that's all done, then let's do BLUE MURDER.' He said, 'Okay.' Now, nothing's happened. It's been a year."

Tony told "The Blairing Out With Eric Blair Show" in January 2020 that he spoke to John "regularly" and he explained that there had been "some issues" with Sykes's record label, resulting in a delay in the release of what was supposed to be John's next solo album, "Sy-Ops". He said: "There are so many dynamics to the story, but it doesn't have to be so complicated. He could just get out there and play music.

"I think one of the things with John is that he has a problem embracing the new business for what it is," Tony continued. "And it is different, and you do have to embrace it."

Carmine concurred, saying: "[John] was always more into the creative part, and the business part he always left to other people. And I know when we were together, he would always ask me, 'What about this? What about that?' So I'm sure he's having a problem embracing the business now. We all are, really, a bit. I mean, I can't believe the way the business is. I've seen it change from [more than 50] years ago. So I'm sure that's part of it with John."

Upon Sykes's firing from the most successful version of WHITESNAKE, the former TYGERS OF PAN TANG and THIN LIZZY axeman set out to create a similar sounding bluesy hard rock band. BLUE MURDER released two studio albums and one live album before breaking up in 1994. The late Ray Gillen, most famous for singing for BLACK SABBATH and BADLANDS, sang for an early version of BLUE MURDER, and the band reportedly recorded demos with him, but he didn't appear on any of the group's albums.

In July 2021, the now-67-year-old Sykes released the official Parker Thibault-produced music video for a new song called "Out Alive". The track, which was recorded at least four years earlier, was expected to appear on the aforementioned "Sy-Ops" LP.

"Out Alive" was the second song from "Sy-Ops" to be released in 2021. Back in January of that year, Sykes dropped a video for "Dawning Of A Brand New Day", also produced by Thibault, with additional footage courtesy of Natasha Gregory and James Sykes.

In 2020, Sykes parted ways with Golden Robot Records without releasing a single record through the label.

Sykes's partnership with the Australian company was first announced in January 2019. At the time, John promised that his first album in two decades would arrive before the end of 2019. However, things apparently went south shortly after the signing, with Sykes later accusing the label of making "little attempt to move things forward despite our best efforts and patience."

Speaking to Reality Check TV at the January 2019 Hall Of Heavy Metal History event in Anaheim, California, Sykes stated about his absence from the rock scene: "I'm looking forward to getting out on the road and playing again. I kind of go underground and stay there for a while. I don't know, man. Sometimes I just take off and shut it all down. But I'm getting the itch, I've been having the itch to get back out and play, so I'm looking forward to that."