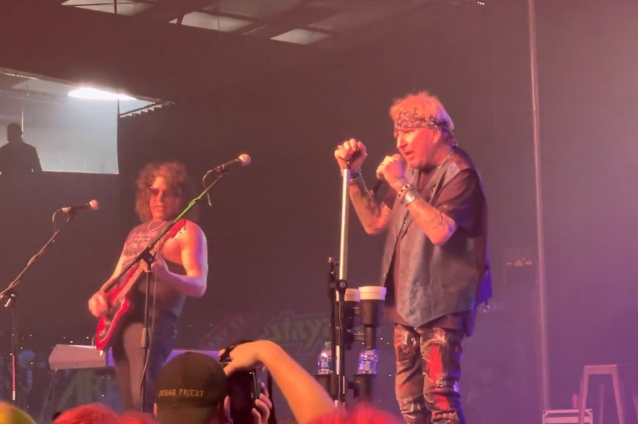 In a recent interview with T Stone of the radio show "Sonic Boom"on Real Rock 100.3 The Fox in Rapid City, South Dakota, former GREAT WHITE and current JACK RUSSELL'S GREAT WHITE singer Jack Russell was asked how he feels about the fact that there are now effectively two versions of GREAT WHITE touring and making new music. He responded: "It's weird, man. I mean, it doesn't bother me — except when Mark [Kendall, GREAT WHITE guitarist] goes out there and starts talking shit about me. Every time he gives an interview, he goes out there and starts talking some kind of shit about me. It's, like, dude, it's been 12 years. Get over it.

"It is too bad," Russell added. "We were best friends, we were brothers for years. And now it's like the guy won't even pick up the phone and speak to me. It's horrible. It makes you feel really bad. And every time I pick up a paper or [I see] something on the Internet [where] Mark's [giving] an interview, he's always talking shit about me. It's, like, dude, talk about yourself. Talk about how great your album is or how great your band is. Leave me the fuck alone. I'm not bagging on you."

Asked by T Stone why he thinks it's that way for Kendall, Russell replied: "I don't know. Maybe he's just pissed off that I'm still doing it. I mean, the first article they did after I left the band was, 'Oh, he'll never pull it off.' And it's been, what? 12 years now?

When T Stone noted that "it's gotta be especially tough" for GREAT WHITE "trying to do it without the actual voice of the band," Jack said: "That's the one thing, I think, that separates the cover bands from the original bands — is the voice. 'Cause that's the one thing that you need. You take Steven Tyler out of AEROSMITH, I don't care who you put in there, it ain't gonna be AEROSMITH… The only time I've ever seen it work was with Sammy Hagar — and just 'cause Sammy is a better singer [than David Lee Roth]. And they wrote some really great songs. But give me a fucking choice, I'd go see David Lee Roth [before] I would [see] Sammy. And I love Sammy; he's a great guy. Dave's a great guy too."

In June 2022, shortly after GREAT WHITE announced that it had parted ways with singer Mitch Malloy, Kendall dismissed the idea of reuniting with Russell, telling Dr. Music in an interview: "[People say,] 'Why don't you patch things up with Jack?' What people don't understand is we never even got in fights [with Jack]. In 25 years together, we might have gotten in two arguments. The thing that took him out is the horrible demons of addiction, and it's really affected his health. I just saw a video the other day where he's not even standing — he's using wheelchairs and he's sitting in a stool. So for us to go back to that, it just feels dark. I'd rather remember him… 'Cause I'm very proud of our career — I'm very proud of the past. I'm so lucky to be a part of it. And I wanna remember it like that, where he's flying around on stage and getting the crowds pumped and singing his heart out — not a sick person. So going to that…"

In November 2022, Russell ruled out the possibility of him reuniting with his former bandmates, telling All Access Live! With Kevin Rankin: "As far as the fans are concerned, for the most part they've been really cool about [there being two versions of the band]. It is what it is. Of course most of them would rather see us back together. There are a few people that, for whatever reason, like a new guy better, which I don't understand. That'd be like me saying I like somebody better than Steven Tyler in AEROSMITH. Or, 'Get rid of that Robert Plant schmuck [in LED ZEPPELIN]. Let me hear somebody else.' I don't know. To each his own. Some things just defy explanation or logic. But for the most part, I think, people would like things, to see them back to where they were, which will never happen. Those days are gone, and anybody out there that's hoping and wishing and praying, it's not gonna happen; I'll tell you right now. Both camps agree [on that]."

Russell went on to say that he chooses to stay away from speaking disparagingly about his former bandmates. "I don't jump on the drama train," he said. "Unfortunately, there are still people that do, in my other band, that still choose to pass along negativity. And I'm not gonna say anything bad about anybody. It's, like, why? We were all huge friends for years. We accomplished one of the hugest things you can ever accomplish together — something that's almost impossible we pulled off. We were on five major labels, so we did it five times. Usually you lose one and you're blackballed. And we were on five different major labels. So there's something to say for that. I never was gonna let up until I was done."

In 2018, Desbrow told ListenIowa that there was never any discussion about possibly bringing Jack back after Terry's exit from GREAT WHITE. "Not at all," he said. "We've already moved on from that. We've gone through a lot of stuff with that over the years, and the fact that he sued us in federal court for the name, and we spent a lot of time and money, you just don't return from that. People tell me that they've seen his latest shows, and it's just hard to look at because his health isn't as good as it could be. We've got a really grueling schedule, and it's hard enough for me, and I'm semi-healthy. [Laughs] I couldn't imagine someone in his condition doing what we're doing. We did shows with him toward the end, and he was in and out of a wheelchair and crutches, had to be carried up stairs, was falling asleep onstage. It just got old. It's a business, and we have families to support and mortgages to pay. You can't go to work messed up 24/7 and still be able to work there."

In October 2022, GREAT WHITE officially named Brett Carlisle as its new lead singer. Carlisle joins the band as the replacement for Andrew Freeman, who sang for GREAT WHITE for only five months.

Carlisle made his live debut with GREAT WHITE on September 24 at the Cannery Casino Hotel in Las Vegas, Nevada.