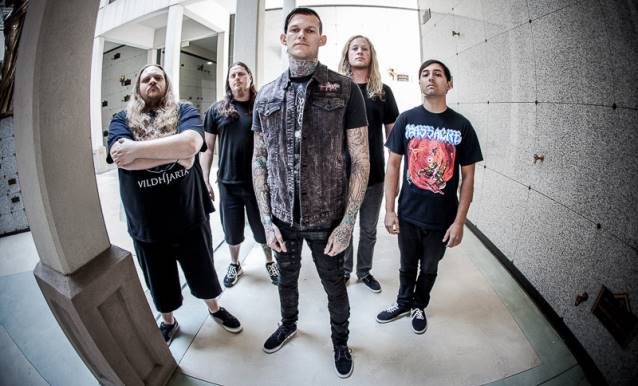 "Die Without Hope", the new album from the San Diego death metal outfit CARNIFEX, sold 3,600 copies in the United States in its first week of release to debut at position No. 98 on The Billboard 200 chart.

"First and most importantly, THANK YOU," comments the band while on the road for its U.S. headlining tour. "Thank you to all our diehard fans for supporting this record.

"Special thank you to Nuclear Blast Records for all their hard work to make this the most successful album of our career. Nuclear Blast and fans like you are keeping uncompromised underground metal alive."

"Die Without Hope" was released on March 7 (Europe) and March 4 (North America) via Nuclear Blast. The CD was recorded at Audiohammer Studios in Sanford, Florida and produced by Mark Lewis (ARSIS, THE BLACK DAHLIA MURDER, WHITECHAPEL, DEVILDRIVER, DEICIDE, SIX FEET UNDER). Cover art for the album was created by renowned artist and longtime collaborator Godmachine.

"Die Without Hope" contains 10 tracks and over 35 minutes of crushing metal. Vocalist Scott Lewis states, "'Die Without Hope' is CARNIFEX at our very best. This is an album over two years in the making. We pushed ourselves every step of the process to include new elements never before heard on any previous CARNIFEX album."