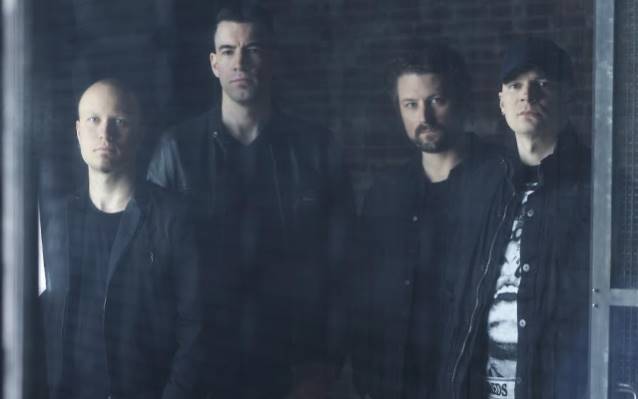 Ceiling Collapses During THEORY OF A DEADMAN Show In Minneapolis

**UPDATE**: THEORY OF A DEADMAN has released the following statement regarding last night's incident:

"As some of you may be aware or may have witnessed, there was a partial ceiling collapse during our show last night at the First Avenue music venue in Minneapolis. At this time, we have been provided no details as to the cause of the collapse.

"As with all of our shows, our primary concern is for the safety of all involved; our fans, our crew, the venue staff and anyone and everyone else who may be in attendance.

"Our thoughts and prayers go out to those who may have been injured or otherwise adversely affected by this unfortunate incident.

"Our sincerest thanks go out to the First Avenue staff, the Minneapolis Fire Department, the paramedics and all the other wonderful people who lent their swift assistance in helping others during the aftermath. We wish the injured a full and speedy recovery. We wish First Avenue a quick turnaround in re-opening the doors of their legendary venue.

"We look to returning to Minneapolis as soon as possible to play for our amazing friends and fans."

According to ABC affiliate KSTP, three people were injured last night (Wednesday, August 12) during THEORY OF A DEADMAN's concert at the First Avenue club in Minneapolis when a large portion of the venue's ceiling came crashing to the floor.

The fire department says a 30-by-30-foot section of the ceiling collapsed over the balcony and DJ booth at the back of the dance floor about 10 p.m. while THEORY OF A DEADMAN was performing. The collapse sent the band running from the stage and forced the evacuation of about 750 fans.

Two of the three injured fans were taken to a local hospital, but none of the injuries are said to be life-threatening.

A source told KSTP the collapse may have been caused by a leaky pipe. The leak may have been accelerated by vibrations from the concert, causing water to build up above the ceiling, which then fell to the floor.

Concertgoer Ben Strumberger told NBC News he was standing in front of the soundboard when he felt a railing begin to shake.

"The band quit playing and everyone turned around," he said. "There was a ceiling piece laying on the floor.

Witnesses told NBC affiliate station KARE that they had seen smoke and the sprinklers go off in the rear of the venue before parts of the ceiling fell.

"There was, like, a smog throughout the whole building," Tess Brennan told KARE. "We thought maybe it was weed, maybe it was cigarette smoke then the sprinklers came on and everything just fell down."

Members of local band 3 PILL MORNING, who attended last night's show, captured part of the incident on video. You can see their Instagram post below, as well as a news report from KSTP.

Whoa! Came out to First Ave to watch our friends in @toadmofficial and the ceiling collapsed!!! Hope everyone is ok! #ceilingfalling #3pillmorning #theoryofadeadman