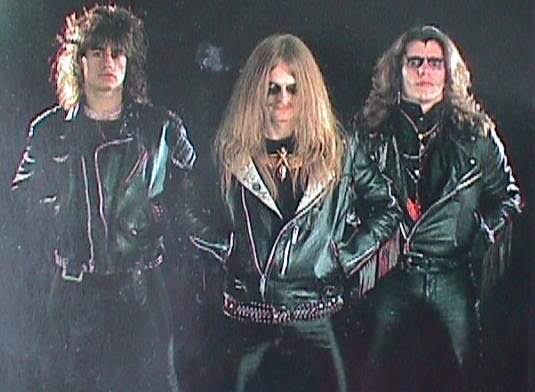 CELTIC FROST will reissue its four seminal Noise Records albums on June 30 via BMG on deluxe hardback CD and 180-gram double album sets, complete with posters and 10-inch spine bound book. All tracks have been fully remastered and these releases contain previously unreleased and rare tracks. These are the definitive CELTIC FROST reissues.

Heroes of the extreme metal scene, there has always been so much more to CELTIC FROST's music. From "Morbid Tales", through "To Mega Therion", onwards to "Into The Pandemonium" and finally "Vanity/Nemesis", this is a band who refused to conform or follow any specific musical direction. They experimented, took risks and in the process have left behind a remarkable catalogue which is timeless and extraordinary. When you hear these albums, you'll appreciate why succeeding generations of diehard fans and cutting edge bands are so heavily inspired and influenced by CELTIC FROST.

It almost seems churlish to regard CELTIC FROST as one of the great extreme metal bands, because they were so much more than that. It's better to hail them as among the finest extreme and experimental bands of the 1980s. Refusing ever to do what was expected or demanded, the band constantly changed musical direction, always brought in surprising influences, and kept people guessing as to where they might venture next. Their catalogue of albums is formidable and unmatched. Each is not only unique, but part of an entire tapestry that only now can be appreciated for being a remarkable part of music history. Despite, or maybe because of, constant turmoil on so many fronts, CELTIC FROST achieved an artistic level few others would even have dared to dream of aspiring towards. They climbed high because they were never afraid to fall. Which is why the band are now rightly regarded as icons, and iconoclasts.

Debut album "Morbid Tales" was originally released in 1984, and quickly became known as the work of agitated and agitating talents. This record was a huge influence on the burgeoning death and thrash scenes at the time: a master-class of riff tirades and unholy sentiments. This reissue includes previously unheard and restored rehearsals from 1984. Both the 180-gram 2LP and CD versions include extensive booklets plus a poster.

CELTIC FROST's second album, "To Mega Therion", was released in 1985 and showcased an ominous pall of doom and gloom, enmeshed in a sound both primitive yet also Wagnerian in its vast scope. This reissue includes the "Emperor's Return" EP as well as a remix of "Visual Aggression". Both the 180-gram LP and CD versions include extensive booklets.

The band's third album, "Into Pandemonium", was originally released in 1987. The record represented a turning point for a whole genre, being extremely ahead of its time. Not only did it have maniacal rhythms, but introduced electronica into extreme metal. On every level, it was a remarkable record, full of visionary ideas and ideals. This reissue includes alternate versions of tracks from the album and a cover of a Dean Martin song. Both the 180-gram LP and CD versions include extensive booklets.

CELTIC FROST's fifth studio album, "Vanity/Nemesis", was released in 1990. It featured a twisted cover of David Bowie's "Heroes" and it saw the band going in a much more thrash-oriented direction. The restless energy percolates throughout, as CELTIC FROST continued to leave fans aghast at their soundscapes and adventurous perceptions. The reissue includes tracks from the "Wine In My Hand" 12-inch EP, and both the 180-gram LP and CD versions include extensive booklets.