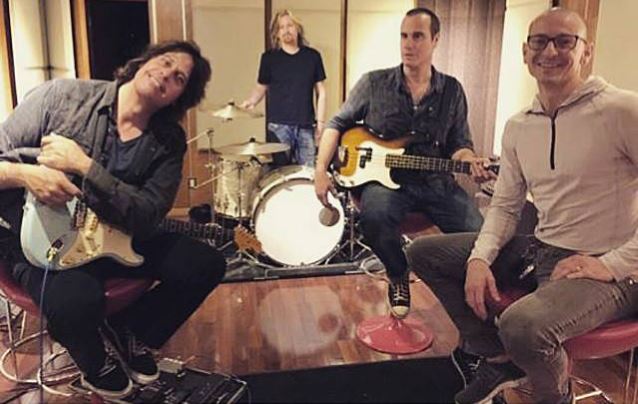 CHESTER BENNINGTON On Performing With STP: 'There's A Lot Of Energy, And It's Super Fun'

STONE TEMPLE PILOTS bassist Robert DeLeo and singer Chester Bennington were were interviewed on the april 8 edition of "The Men's Room", which airs on the Seattle station KISW 99.9 FM. You can now listen to the chat using the audio player below.

Speaking about what the fan reaction has been to his stepping into the singer role in STONE TEMPLE PILOTS following the 2013 dismissal of the band's original vocalist, Scott Weiland, Chester said: "I am not Scott, and I am a new singer in the band, and I am in another band [LINKIN PARK], and there are people who come to the shows who are skeptical and they wonder what they're gonna see and they leave and they're converted and they like what's happening and they see us all having a great time and we enjoy playing."

Bennington also talked about the chemistry between the STONE TEMPLE PILOTS members when they hit the stage. He said: "We've been out there; we've played a bunch of shows together so far. And anybody can go online and watch what again and see what we do and they'll know what they're gonna see [if they come to one of our shows]."

He continued: "We're very pleased with the way things go when we play live. I mean, it just feels really good. There's a lot of energy, and it's super fun."

Bennington was asked in a recent interview with ArtistDirect.com about the progress of the band's next full-length album, which is due out this fall. He replied, "We're really trying to take the musicality to a different level and to bring a lot of energy. We got super funky. This thing is as raw and real as it gets... It's fun to be a part of that and do it on that level this way. It's really interesting. I'm having a great time doing it."

STONE TEMPLE PILOTS recently dropped the added "With Chester Bennington" from their name after settling their legal issues with Weiland.

The band began working with Bennington in May 2013 after firing Weiland three months earlier. So far it has released one EP called "High Rise" with Bennington on vocals.