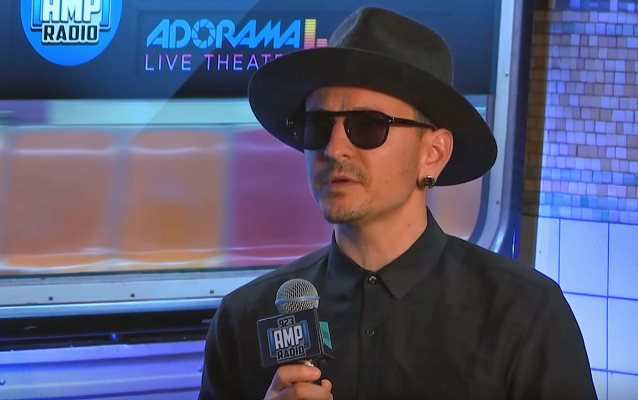 AMP DJ Omar recently conducted an interview with LINKIN PARK singer Chester Bennington. You can now watch the chat below. A couple of excerpts follow (transcribed by BLABBERMOUTH.NET).

On the evolution of the LINKIN PARK songwriting process:

Chester: "I always say that our journey musically is a journey, it's not a destination, and one of the things that we've always done is we've always tried to add to what we know how to do already. So once you have it, it's kind of like riding a bicycle — once you're on a bicycle, you know how to ride it. You're not thinking about, like, 'Okay, when I learned how to ride this bicycle, did I sit on it first and then go, 'Pedal, pedal,' you know what I mean? You just do it. So all the things that we've learned throughout our career on how to write songs just comes naturally after you put it into practice. It's all the stuff that we don't know — it's all the methods, all the processes, the philosophies that other producers and writers, or even artists, have. That's the stuff that we're always trying to gain. And we're picking people's brains all the time, whether you're directing a video or whether you're a painter or a composer or anything, we're always asking about the process and how that process works for each person, and then we try to take what they have to offer and put that into our toolbox."

On the less guitar-driven sound of the new LINKIN PARK album, "One More Light", and the disc's first single, "Heavy":

Chester: "Well, we didn't set out and go, 'Okay, let's take the guitars back.' It was, really… we had the song. I cut most of the vocals over either just a piano or an acoustic guitar. And so I would do the first main vocal take in that most simple form. And in that frame of mind, that's how the song was being inspired — to write it in that way — and then we'd build the track around it. So, in some cases, we'd play with it throughout the process — adding more guitars in or maybe changing some sounds; we create all of our own sounds on every record. And for us, it was just more a matter of supporting the vocal as opposed to placing the vocal on a track. When we're writing tracks first, I'm like a dog to a squirrel: I see it and I wanna go get it. So, like, if I hear a track with no melodies and nothing speaking to me lyrically, I'm always compelled to go to the heavy stuff because that evokes an emotion right away, and I get excited when I hear heavy, fast music and a riff. And that's awesome — I wanna kick something in the face or whatever, I wanna break stuff, [and] that all works really great. But a lot of times we find ourselves kind of beating our heads against the wall trying to come up with an inspired vocal over some of those tracks, because we can make a track sound amazing — it doesn't inspire our vocal all the time. So we spent a lot of time building tracks that kind of go nowhere. This time around, we really only focused on melodies and lyrics, and it made the process so much more productive and so much more fluid. We wrote a bunch of great songs, and we just put all the best ones on this record."

On getting the stamp of approval from SLIPKNOT and STONE SOUR singer Corey Taylor:

Chester: "I do shows with Corey, we do shows with this band called KINGS OF CHAOS, and we share the stage. We just love music, dude. I had a chance to play him some of the new songs. I was, like, 'I know you hate pop music.' 'Cause he's always, like [adopts growling voice], 'I hate pop music. Aarrrgh.' And so I was, like, 'I'm just letting you know: this is pretty poppy.' And he listened to 'Heavy', and I played him a couple of other songs, and he was, like, 'Dude, these are great!' The thing is I feel like when you write a good song, it doesn't matter what style it is, as long as the substance of the song is good. So I felt good. I was, like, 'All right. Corey's down with it. All right, I got a 'thumbs up' from the Prince Of Darkness.' [Laughs]"

"One More Light" is due out on May 19 through Warner Bros. Other tunes on the new CD include "Nobody Can Save Me", "Good Goodbye", "Talking To Myself", "Battle Symphony", "Invisible", "Sorry For Now", "Halfway Right", "Sharp Edges" and the title track.

LINKIN PARK has already started booking dates in Latin America, Europe and Asia, but has yet to announce North American shows.