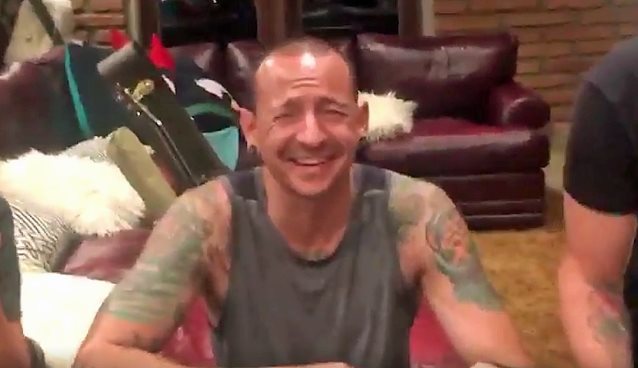 Chester Bennington's widow has posted a video of the late LINKIN PARK singer filmed hours before he took his own life.

On Saturday, Talinda Bennington shared a forty-second clip on Twitter showing her husband laughing and having fun with his family as they experiment with different-tasting jelly beans.

"This is what depression looked like to us just 36 hrs b4 his death," Talinda captioned the post. "He loved us SO much & we loved him."

Before posting the video, Talinda wrote: "My next tweet is the most personal tweet I have ever done. I'm showing this so that you know that depression doesn't have a face or a mood."

Using the hashtags #FuckDepression and #MakeChesterProud, Talinda is growing an online community that is there to support people with depression, and people who have been impacted by a loved one's depression or suicide.

Chester and Talinda had three children together, Tyler Lee, 11, and Lila and Lilly, both of whom are 6.

The rocker was found dead in his Los Angeles-area home on July 20.

Bennington's private funeral service took place on July 29 near his home in Palos Verdes, California. It was attended by five hundred guests, including members of all three bands he sang in: LINKIN PARK, STONE TEMPLE PILOTS and DEAD BY SUNRISE.

This is what depression looked like to us just 36 hrs b4 his death. He loved us SO much & we loved him. #fuckdepression#MakeChesterProudpic.twitter.com/VW44eOER4k