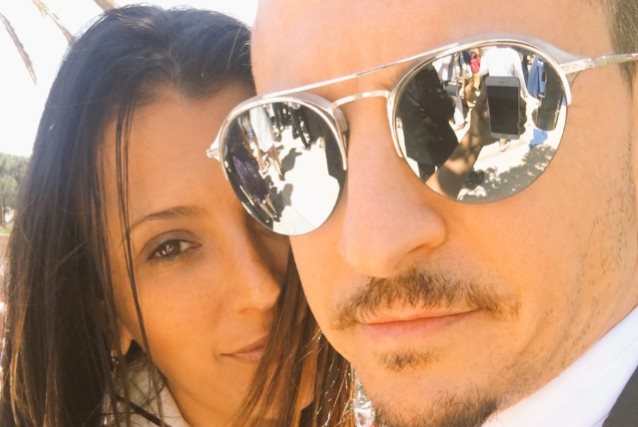 CHESTER BENNINGTON's Widow: 'The Loss Of My Husband Just Left Such A Gap In Our World'

Using the hashtags #FuckDepression and #MakeChesterProud, Talinda is growing an online community that is there to support people with depression, and people who have been impacted by a loved one's depression or suicide.

Asked how the idea came about to launch the #FuckDepression hashtag, Talinda said (hear audio below): "One of those sleepless nights, I was on Twitter and I was reading through just hundreds of condolences to myself and my children. And I started to notice that fans were saying they were hurting, and they didn't know what to do. And it weighed heavily on my heart, because their words were comforting me. And I just thought to myself, 'You know what? What if we could just talk to each other?'

"My husband and [the rest of LINKIN PARK], they have worked for twenty-plus years creating this amazing fanbase, just a strong network of people," she continued. "They've made themselves as human as possible to everybody. And I just thought, 'You know what? I'm gonna use that.' Somebody had tweeted me, this lady had tweeted that her sister had committed suicide in December, and six days later, her other sister committed suicide, and then her mother was dying of cancer. I was, like, 'Oh my gosh.' So I just tweeted out, I said, 'LP family, let's let' — and I put her Twitter name — 'let's her know she's loved and needed.' And that just kind of took off."

She added: "Mike [Shinoda, LINKIN PARK co-vocalist] started the '#MakeChesterProud' hashtag, which I thought was awesome — trying to spread positivity. So I tagged that. Then somebody on Twitter said, 'I'm so sick of being depressed. I've had it all my life. [Fuck] depression.' And I read that, and I just heard Chester… 'Cause he was always saying the 'F word.' [Laughs] Try living with that, with our children. I'm always telling him, 'Babe, stop.' And he would tell the kids, 'When you pay your own bills, you can talk like this.' So I just saw Chester saying, '[Fuck] depression,' and I said, 'We should create a hashtag,' and it just took off. And I just kept calling out. When there'd be somebody that was hurting, I just, 'LP family.' And then it became so widespread, [with] support from some other musicians and their fanbase. And now it's just a call to help. When somebody is hurting, I just use my followers and ask them to lift one another up. So that's how it all got started."

Asked how using her social media presence to try to end the stigma that surrounds suicide and depression is helping her deal with her personal grief, Talinda said: "It's helping me heal. I get asked a lot, 'What are you doing for yourself?' And this is what I'm doing for myself. Of course, I've talked to a grief counselor and a therapist and stuff, and that's helpful — don't get me wrong — and I do still seek counseling, as do my children and everything, but for me personally, this is the most healing things I've done so far. And when I'm feeling down, I just jump on Twitter and retweet positivity and retweet awareness."

She continued: "We all speak about social media as, 'We can hide behind our computer and we can hide behind our phone and say anything we want.' And if you take that, though, and turn this into what I started doing, [which] is, yeah, we can still hide behind our phones, and there's no face to really saying, 'I think I wanna end my life today,' that might be easier for people to do, to text that on social media, than to say that to one person face to face. So by putting a spotlight on that person on social media… I mean, they're putting themselves in the spotlight, actually, by just tweeting, 'cause that's a [public] forum. I'm just not trying to be a one-man show and think I have all the answers. I figure there's more power in numbers, and there's definitely numbers on social media."

Talinda is determined that something positive will come out of the tragedy, believing that her social media campaign can help change attitudes towards mental health problems and tackle the stigma surrounding it.

"The loss of my husband just left such a gap in our world, and I feel like his death is kind of the straw that broke the camel's back with this," she said. "He's left me with such a huge platform to be able to be heard, and that's what I plan on doing in his name, in his honor.

Chester and Talinda had three children together, Tyler Lee, 11, and Lila and Lilly, both of whom are 6.

In a 2009 interview with Bullz-Eye, Chester discussed how Talinda helped him overcome the depression that he felt after the split with his first wife.

"My divorce was one of the worst and best things to ever happen to me in my life," he said. "Everything I had worked so hard for was gone after we were through. Everything! I was wiped out and it was tough on my ego to let go of all of that. I went from living in a huge house to a tiny apartment in Santa Monica. I was so drained and bitter during that time. But I eventually learned from it and moved on," he added, "I then fell in love again and I got help facing my demons… When I met Talinda, I knew she was the one pretty instantly. She moved into my place after a week and a half or something like that."