Finnish metallers CHILDREN OF BODOM have released a special lyric video for the song "My Bodom (I Am The Only One)", taken from their latest studio album, "I Worship Chaos".

On October 20, fans were encouraged via social media to submit photos of themselves with the band for a chance to be in an upcoming video. Over 300 photos were selected to be featured in the "My Bodom (I Am The Only One)" lyric video.

CHILDREN OF BODOM frontman Alexi Laiho comments: "This is the coolest and my favourite lyric video by far because we actually had a chance to include COB fans from all over the globe in it. It's the least we can do to show our gratitude, love and appreciation of the madness they bless us with night after night. I can't wait to play the song live on the upcoming tours!"

CHILDREN OF BODOM will embark on a 21-date North American tour with special guests iconic black metal artist ABBATH, California-based metal act EXMORTUS, and Canada's progressive metallers ONI. The trek will commence in Quebec on November 23 and will hit three Canadian cities as well as Chicago, San Francisco, New York, and conclude in Brooklyn on December 19.

In an interview with Ultimate-Guitar.com, Laiho spoke about the recent addition of touring guitarist Daniel Freyberg (NAILDOWN, NORTHER) to CHILDREN OF BODOM's lineup. He said: "I've actually known him for over ten years. He's played in a couple bands so I always knew he could play guitar. When we started looking for a new member, or at least somebody to do the shows with, we tried out a couple guys who didn't live in Finland and it didn't work out and this guy, he was right there and he just informally brought it up, like, 'Hey, if you guys need any help, let me know.' I hadn't heard him play in a while, so I had him send me a video with a couple of riffs to see if he could still play, and he rocks. He's a hard-working dude. He's a quick learner, and so far it's been awesome. But the thing is, we haven't really decided if we're going to have him as a permanent member or not. We're still not sure what's going to happen for sure."

Laiho added that there is a lot more to being in a band than just playing ability.

"When you think about it, the playing part is such a small part of being in a band because the playing should be there no matter what," he said. "Being in a band is more about having people you get along with. We're the kind of band who is constantly on the road, so you do basically live with each other so it's super important that we get along. If there's one guy that bums another guy out, it can be pretty destructive. I've seen that happen to so many bands, and I don't want that around."

CHILDREN OF BODOM in May 2015 announced the departure of the band's guitarist of ten years, Roope Latvala. Laiho told Artisan News about Roope's exit from the group: "We were at a phase where we wanted to, sort of, have a new beginning and reinvent ourselves, on a certain level. And everybody — all four of us — were pushing it harder and putting more effort on the band and just working extra, extra hard. And he wasn't quite there with us, you know, as far as the level of work ethics and, you know, stuff like that. So we felt like everyone's better off if we part ways at this point, and that's what happened. And, yeah, it [happened] three days before we hit the studio [to record the new CHILDREN OF BODOM album, 'I Worship Chaos'], but it was not… I mean, it was something that everybody was sort of anticipating already. And I had… To be honest, I had decided, a month or so before that, that I was gonna do all the guitars on the album. Because, like I said, it wasn't just working out with him."

He continued: "I don't wanna talk shit or anything; it's just that that happens. It's life. And you can't dwell on it. It sucks. It really does, man. He was around for twelve years, and, for us, the band, it really is a family, and losing a member, it's a big deal for us. 'Cause we're not the type of band [where] we change members every other week. But, you know, you've gotta move on. And that's that, really."

CHILDREN OF BODOM last year recruited Antti Wirman, the younger brother of the band's keyboardist Janne Wirman, to handle second-guitar duties for some of their shows. 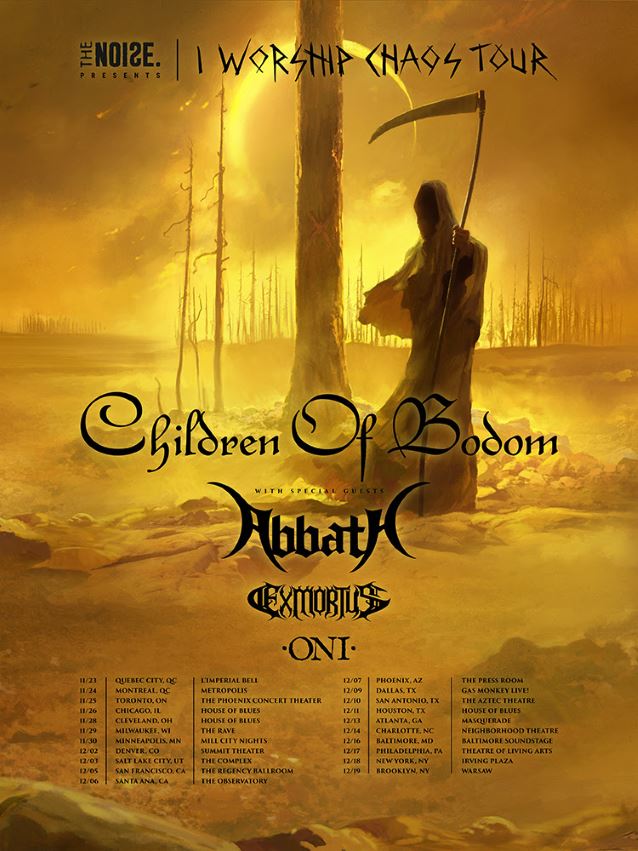