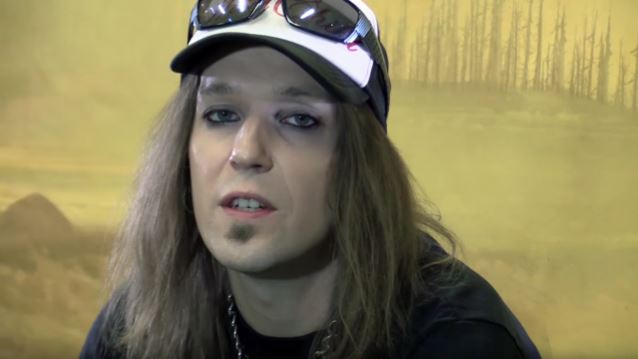 CHILDREN OF BODOM's ALEXI LAIHO On Split With ROOPE LATVALA: It Just Wasn't Working Out With Him

Finnish metallers CHILDREN OF BODOM in May announced the departure of the band's guitarist of the past decade, Roope Latvala. He has since been replaced on the road by Antti Wirman, the younger brother of the group's keyboardist, Janne Wirman.

Speaking about Roope's exit from CHILDREN OF BODOM, frontman Alexi Laiho told Artisan News: "Well, without going into too many details, you know, I think that… Well, basically, what it was… was that, you know, we had… We were at a phase where we wanted to, sort of, have a new beginning and reinvent ourselves, on a certain level. And everybody — all four of us — were pushing it harder and putting more effort on the band and just working extra, extra hard. And he wasn't quite there with us, you know, as far as the level of work ethics and, you know, stuff like that. So we felt like everyone's better off if we part ways at this point, and that's what happened. And, yeah, it [happened] three days before we hit the studio [to record the new CHILDREN OF BODOM album, 'I Worship Chaos'], but it was not… I mean, it was something that everybody was sort of anticipating already. And I had… To be honest, I had decided, a month or so before that, that I was gonna do all the guitars on the album. Because, like I said, it wasn't just working out with him."

He continued: "I don't wanna talk shit or anything; it's just that that happens. It's life. And you can't dwell on it. It sucks. It really does, man. He was around for twelve years, and, for us, the band, it really is a family, and losing a member, it's a big deal for us. 'Cause we're not the type of band [where] we change members every other week. But, you know, you've gotta move on. And that's that, really."

You can watch the clip on the Artisan News YouTube channel.

Antti will play with CHILDREN OF BODOM through the end of the year. The group will then decide what to do about the second-guitarist position on a more permanent basis.

"I Worship Chaos" will be released on October 2 via Nuclear Blast. The artwork for the CD was created by Finnish artist Tuomas Korpi.