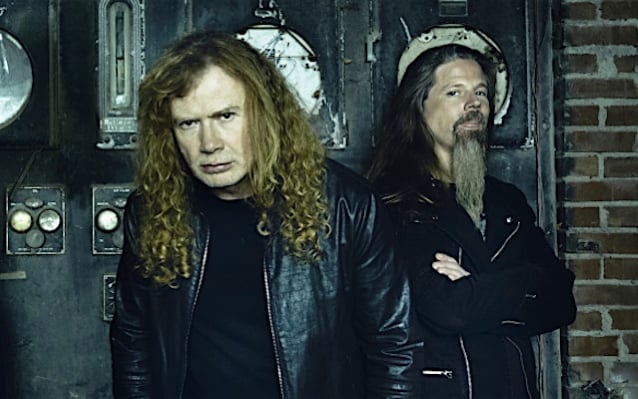 CHRIS ADLER: Getting The Call From DAVE MUSTAINE To Play With MEGADETH Changed My Life

Former LAMB OF GOD drummer Chris Adler says that getting the call to play with one of his favorite bands, MEGADETH, was a life-changing experience.

Adler played drums on MEGADETH's latest album, 2016 "Dystopia", and took part in most of the band's live shows in support of the CD between January and May of that year. On those shows in late 2015 and early 2016 where Adler was unable to perform with MEGADETH, he was temporarily replaced by Tony Laureano (ex-DIMMU BORGIR, NILE, ANGELCORPSE),the veteran extreme-metal skinsman who had worked as the band's drum tech since 2011. Since May 2016, MEGADETH has utilized the services of Dirk Verbeuren, the Belgian-born-and-now-Los-Angeles-based drummer who had previously played with SOILWORK for more than a decade.

Asked in a new interview with Saint Virus Bar how he landed the MEGADETH gig, Chris said (as transcribed by BLABBERMOUTH.NET): "I'm in L.A. I'm recording drums for [LAMB OF GOD's 'VII: Sturm Und Drang' album]. We had been on tour in 2005 with MEGADETH. And I get a call really early in the morning — like, six in the morning. And it is [MEGADETH leader] Dave Mustaine's guitar tech, a guy named Willie G who I became good friends with along the tour; a great guy. And Willie's, like, 'Hey, your phone's gonna ring in about five minutes, and you should answer it.' I'm, like, 'Okay. Sure.' And the phone rings in five minutes, and it's Dave. And Dave's, like, 'Hey, I enjoyed touring with you. Good chat now and then.' He's not a particularly social guy on tour, but we did hang out a couple of times for breakfast or whatever. And he's, like, 'There's a lot of people that I really trust that tell me you're somebody that I think I should be talking to right now. I'd really like to go back and make a pretty sick thrash record, and I'm interested in having you be a part of that, if you'd like to be.' And it was a 'Candid Camera' kind of moment. 'Is something happening?' It really was the band that changed my life, and now I'm on a phone call that's about to change my life again."

Dirk was recommended for the MEGADETH job by Adler, who called Verbeuren "probably [one of the] top three drummers in the world."

During a July 2016 press conference in Tel Aviv, Israel, Mustaine said that Adler was never a full-time member of MEGADETH and was merely "a session guy" for the "Dystopia" album and some of the subsequent shows. "It was what you could call 'work for hire,'" he said.

Four months earlier, Mustaine told the South Orange, New Jersey radio station WSOU that he "thought it was really inspiring being around [Chris] and his positive energy and really optimistic outlook towards life and music in general. It was good for me [and] it was good for the band."

In a 2015 interview with "The Jasta Show", Chris stated about the songwriting sessions for "Dystopia": "When I first heard the demos, it was well played and it was drum machine, drum samples and stuff, and it wasn't really, kind of, my style of playing. It felt like, kind of, what had been going on before, where it was just [hums a basic beat]. And I really wanted to not have to do that. And so, right away, I brought that up [to Dave]. I said, 'Listen, I'm thankful that you're calling me. But are you calling me because somebody is telling you to call me, or are you calling me because you've heard what I've done and you want me to do some of that — at least some of that — on your record. Because this stuff that's on here is not… that's not cool.'"

Adler went on to say that Mustaine was open to suggestions during the songwriting process. "For example, we did a [cover of a] song called 'Foreign Policy' by FEAR — and old punk rock tune — and it was fun," he said. "And it's a punk rock tune. But as we soon as we learned it… We learned it and played it in one day. And I'm throwing in a ton of double bass. And he stops the song in the middle. He's, like, 'Woah woah woah. What's with the double bass? It's a punk rock song. What are you doing?' I was, like, 'Yeah, it's a punk rock song. But FEAR was a punk rock band. MEGADETH is a metal band. This is MEGADETH. Let's do this the MEGADETH way.' And we kind of moved on to other things. And the next day he came back in. He said, 'You know what?! I was thinking about that last night. You're right, man.' He was, like, 'Let's do this. Let's make it MEGADETH.'"