Chris Cornell's widow has accused the surviving members of SOUNDGARDEN of wanting access to the band's social media accounts in order in order to "maliciously defame" her, "provoke her online stalkers" and to "instigate third parties" to harass her and her minor children.

According to Billboard, Thayil, Cameron and Shepherd claim their socials were previously managed by their then-management company Patriot Management. They say they later learned that Patriot had handed over all the login information to Vicky after Patriot was terminated in October 2019.

The band asked a judge to order Vicky Cornell to hand over the passwords or include a final posting stating, "SOUNDGARDEN has temporarily suspended its official social media accounts due to pending litigation."

On Thursday, Chris Cornell's Instagram Stories shared a statement from the late singer's former manager Ron Laffitte in which he wrote: "During my six years working with Chris Cornell and SOUNDGARDEN, Chris and Vicky always controlled all of SOUNDGARDEN's social media accounts, both directly and through their own personal social media representative. At no time were any other members of SOUNDGARDEN involved, and this was true both before and after Chris died. Because of this, SOUNDGARDEN's attempt to seek an injunction in connection with the social media accounts is surprising to say the least."

Also posted on Chris's Instagram was a separate statement from Vicky's lawyer, Marty Singer. It read: "Ms. Cornell's forthcoming motion will expose the truth about SOUNDGARDEN's supposed social media accounts. Ms. Cornell created the social media accounts; grew the accounts by allowing them to trade on Chris' then-existing, popular accounts; devoted her personal time and money in growing these accounts as SOUNDGARDEN displayed absolutely no interest in social media (unless it was to promote their solo projects). Ms. Cornell has overseen these accounts for close to a decade. The fact that SOUNDGARDEN is unaware of the user-names and passwords for their alleged 'own' accounts confirms their utter lack of involvement in creating, growing and maintaining their alleged accounts.

"SOUNDGARDEN solely wants the social media accounts in order to maliciously defame Ms. Cornell, provoke her online stalkers (as Matt Cameron has done continuously) and to instigate third-parties to harass Ms. Cornell and her minor children. Moreover, while they now claim a sense of urgency, SOUNDGARDEN's claim are a stale repacking of the claims that they filed in the Florida court in May of 2020."

Responding to Vicky's lawsuit, Kim Thayil, Ben Shepherd and Matt Cameron claimed that they "don't have possession" of their "own creative work," and alleged that "Vicky Cornell has possession of the only existing multi-track recordings of the last SOUNDGARDEN tracks that include Chris Cornell's instrumental parts and vocals. All of the band members jointly worked on these final tracks, Vicky now claims ownership of the final SOUNDGARDEN album."

In February, Vicky Cornell sued the surviving members of SOUNDGARDEN over the buyout price for her stake in the band. In the lawsuit, Vicky Cornell said Thayil, Cameron and Shepherd offered her just $300,000 for Chris's share. This amount, she said, is far lower than the real value of the Chris Cornell estate's interests in SOUNDGARDEN, especially considering the fact that the band got an offer of $16 million from an outside investor for SOUNDGARDEN's masters. 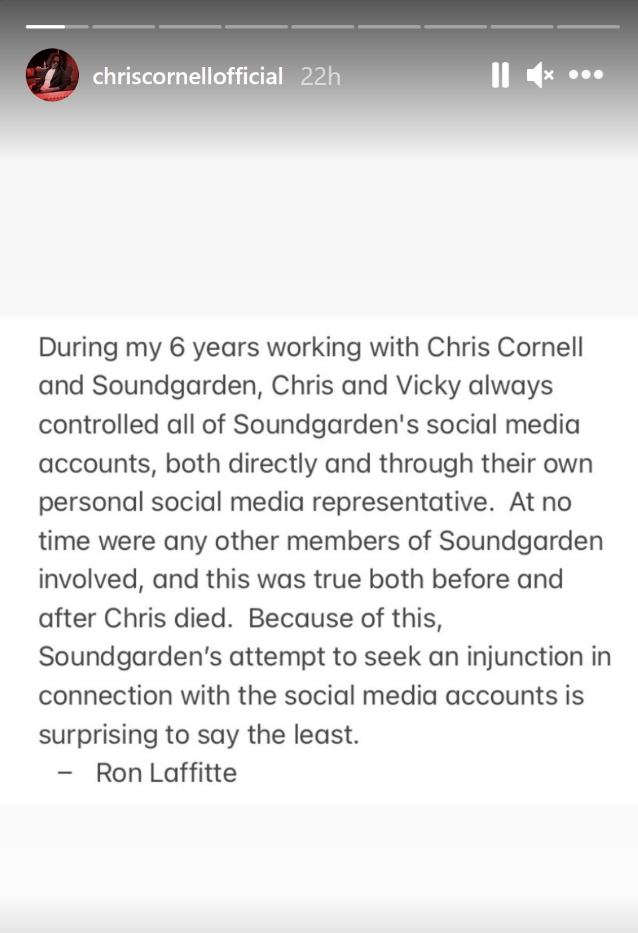 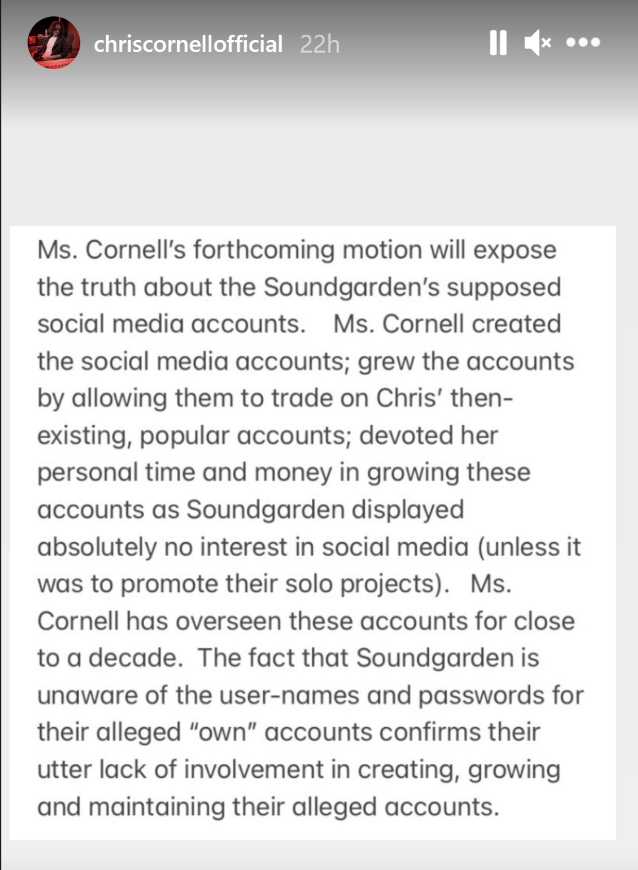 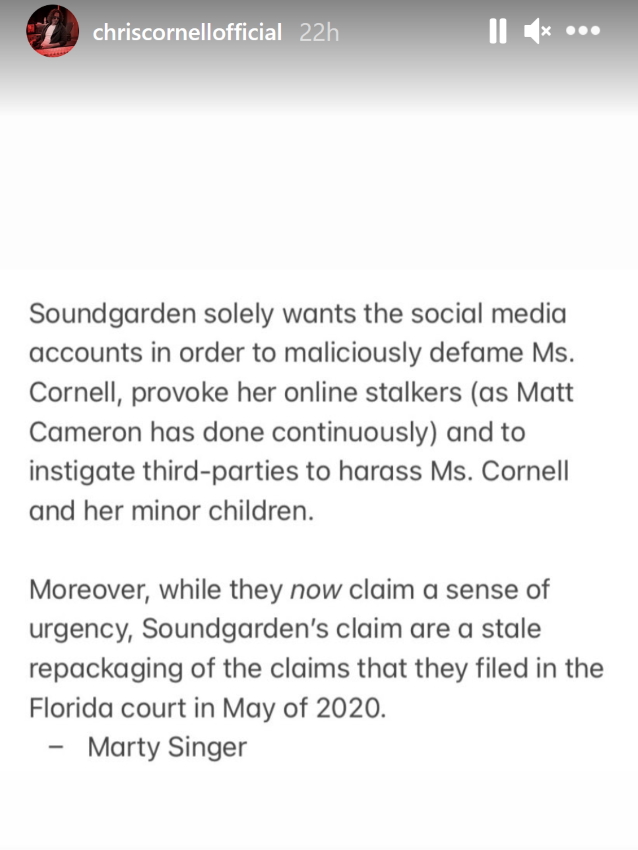