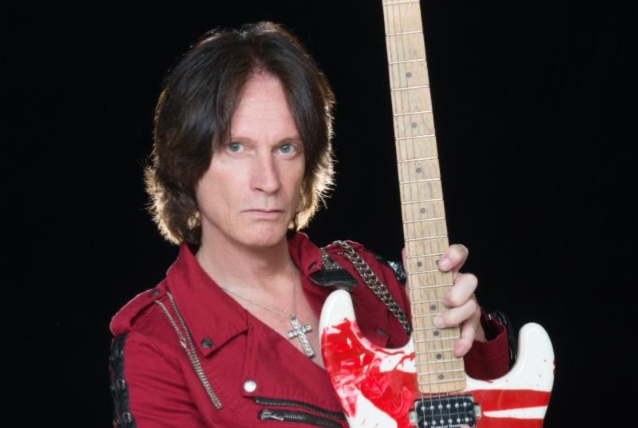 CHRIS IMPELLITTERI: I Am Not An YNGWIE MALMSTEEN Clone

Neo-classical guitarist Chris Impellitteri has dismissed suggestions that he is an "Yngwie Malmsteen clone," saying that he views himself as "much more of a child of players like Al Di Meola blended with a [Eddie] Van Halen and [Randy] Rhoads."

Impellitteri first made his mark in 1987 with the release of his debut EP, "Impellitteri". Chris has since issued 11 albums under his band name, IMPELLITTERI, including his latest, "The Nature Of The Beast", which features his longtime bandmates, vocalist Rob Rock and bassist James Amelio Pulli, plus ex-SLAYER and TESTAMENT drummer Jon Dette. The disc was recorded in Los Angeles with engineer/producer Mike Plotnikoff (VAN HALEN, AEROSMITH, IN FLAMES) and Canadian mix engineer Greg Reely (OVERKILL, FEAR FACTORY, MACHINE HEAD).

This past Sunday (January 27),Impellitteri took to his Facebook page to address the comparisons with the legendary Swedish guitarist, explaining that Yngwie is just one of many axemen who have had an influence on Chris's playing.

"On a daily basis, there seems to be weird people that constantly try to call me a Yngwie clone or ripoff or something of the sort, so I thought I would have some fun and address this once and for all as I never do," Impellitteri wrote.

"First of all, I have tremendous respect for Yngwie and he, like [Eddie] Van Halen, Al Di Meola, John McGlaughlin, Randy Rhoads, Michael Schenker, Tony Iommi, Paul Gilbert, Uli Roth, [Jimi] Hendrix, John Sykes, Gary Moore, [George] Lynch, and many more, has certainly had some impact on the way I play guitar. However, Al Di Meola, John McGlaughlin, Eddie Van Halen, Randy Rhoads, Tony Iommi, Michael Schenker, [Ritchie] Blackmore, Vivaldi, Sykes, have had a significant influence on me. (Even early on, a guitar player named Jimi Bell was a significant help in influencing my speed and accuracy.) To say I am only an Yngwie clone would be spectacularly unfair to all the other guitar players out there, including some of the newer guys closer to my age, like Jeff Loomis, Zakk Wylde, Doug Aldrich, and so on that have an effect on me.

"I like to think of myself as a sponge," he continued. "I try to learn from all guitarists/composers and then take that knowledge and incorporate that into my own playing of which makes me me!

"It's funny, I read comments of people saying I even used to dress like Yngwie, which is wrong. In fact, in the 'Stand In Line' music video, I am playing a Ritchie Blackmore Stratocaster, wearing the ridiculous white boots as a tribute to the RAINBOW era band with Graham of which Blackmore, Schenker, Uli Roth all wore those boots with two of them playing cream-colored Stratocaster with scalloped necks in the 1970s long before Yngwie...ha ha!).

"On a side note, I think Fender many years ago did give me a red Yngwie Strat, which I played but hated. The reason I tried the guitar for a short while was I wanted to try scalloped necks as Uli Roth, McGlaughlin and Blackmore used them for years in the 1970s and it was the only guitar Fender had in their custom shop with a scalloped neck that I could try.

"At the end of the day, I view myself much more of a child of players like Al Di Meola blended with a Van Halen and Rhoads, of which is why I sound very American vs. European. But Yngwie should still get credit, as I certainly feel he has had an influence on me, like others. I think I learned the four patterns that I occasionally use from him, although they are really a basic pattern Bach used a lot. I also do think his tone has had an influence on me, like Van Halen's tone on the first record.

"In the end, there will always be people with differing opinions which they have every right to voice! So please feel free to say what you want about me... I love it!! But I thought I would at least give credit to everyone that influences me."

https://m.youtube.com/watch?v=8voGBe7Bhhs
Malmsteen vs IMPELLITTERI.......on a daily basis there seems to be weird...