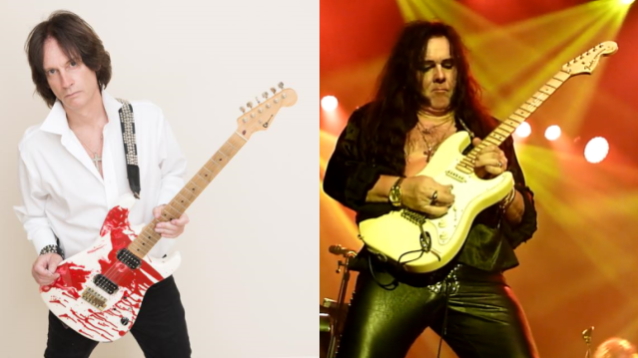 Neo-classical guitarist Chris Impellitteri has once again dismissed suggestions that he is an "Yngwie Malmsteen clone," saying that he views himself as much more of a child of players like Al Di Meola blended with a Eddie Van Halen and Randy Rhoads.

Impellitteri first made his mark in 1987 with the release of his debut EP, "Impellitteri". Chris has since issued 11 albums under his band name, IMPELLITTERI, including his latest, "The Nature Of The Beast", which features his longtime bandmates, vocalist Rob Rock and bassist James Amelio Pulli, plus ex-SLAYER and TESTAMENT drummer Jon Dette. The disc was recorded in Los Angeles with engineer/producer Mike Plotnikoff (VAN HALEN, AEROSMITH, IN FLAMES) and Canadian mix engineer Greg Reely (OVERKILL, FEAR FACTORY, MACHINE HEAD).

Impellitteri addressed the comparisons with the legendary Swedish guitarist in a new interview with Jeff Gaudiosi of MisplacedStraws.com. Asked about the supposed "rivalry" between the two musicians, Chris said: "I never thought there was any rivalry. And by the way, I have nothing but respect for Yngwie. I mean, he absolutely influenced me, just like Van Halen, Randy Rhoads, Tony Iommi — I could go on and on. I've been influenced by virtually every guitar player. Yngwie was already very, very successful. I don't know why there'd be any fear from him or a rivalry that we were coming in. We get labeled as these shred guys. and I'll be honest, I definitely brought a little bit of that on myself. 'Cause as a kid, you work really hard, you practice eight, nine hours a day, you're always trying to master your craft and be the best you possibly can be, so you definitely have that competitive spirit.

"I know that when we came out with the IMPELLITTERI black EP, from day one I made one thing very clear to our band guys and our manager, I said, 'I don't want this to be the Chris Impellitteri ego guitar instrumentalist or solo show. This has gotta be a band,'" he explained. "It's four or five guys equally contributing. Even if I'm writing the bulk of the music, Rob writes all the lyrics, all the vocal melodies — he does that. The bass player comes and does all of his own contributions, and our drummer, same thing. And so when you hear IMPELLITTERI, it's a band; it's not me the solo artist. So if people like us, give credit equally to all the guys in the band. It's not, 'Oh, Chris did this.' It's everybody.

"For me, there was no rivalry," Chris repeated. "After a while, I did get annoyed with the comparison, but to be fair, I got it. Because, look, Graham [Bonnet, formerly of RAINBOW and ALCATRAZZ] joins IMPELLITTERI, right? We do 'Stand In Line', we do a music video that was really popular on MTV. And now here's the thing that people need to understand, and especially the critics acknowledge. The people that said, 'Oh, he's just ripping off Yngwie,' be really careful with that statement, because if you look in the 'Stand In Line' video, I'm playing a Ritchie Blackmore Stratocaster, I'm wearing almost an identical, almost as an homage to Ritchie, the white boots, all of that; it was from Ritchie Blackmore, who had been doing that since the late '60s. It wasn't about copying Yngwie — who I love. Again, I'm not saying anything negative towards him, but if you're gonna basically state we were doing anything, it was really credit towards the whole RAINBOW kind of thing.

"I guess going back to your question, I never really felt any rivalry; it never bothered me," Impellitteri added. "Except there were times when people kept going, 'Oh, he's just an Yngwie clone' or 'Yngwie wannabe' or whatever, and I'm thinking, 'Well, I'm flattered that you put me in the same sentence 'cause he's a great player. But the reality is if you really were to listen to Chris Impellitteri the guitar player, if you listen with an open mind, if you listen to who I am, I think it's obvious that probably my biggest influence, the three biggest influences that I have [are] early Eddie Van Halen… I mean, when I get my guitar amps, the tone dialed in, everything, I'm always trying to mimic 'Eruption' or 'I'm The One'. And even a lot of the fast stuff, people don't realize I'm using a lot of the Van Halen patterns, the picking patterns that he did in the song called 'Spanish Fly' where does he really fast, articulate stuff. So it's Van Halen, followed by Randy Rhoads. And then actually, I'm sorry, there were three guys that really should get the credit for the speed thing, because I was doing that long before I ever heard guys like Yngwie. So the guys who really got me into it, for the most part, were Al Di Meola, John McLaughlin and Paco Delucia. Listen to the record 'Friday Night In San Francisco'. You hear them play and you immediately go, 'Oh, that's what Chris is ripping off.' So that's really how I evolved. But we got thrown in. And somebody told me other day, and I guess it's true — around '85 or '86 when we were all on the L.A. scene and we were the guys doing metal, I think there were probably five or six of us that were kind of known as the shredders. So Yngwie was first. There was Paul Gilbert. There was me. There were two guys that I really liked a lot — Tony McAlpine and Vinnie Moore. And then there was Michael Angelo Batio; I think at that time he used a different name. But him. And then later you had amazing guys like Jason Becker and all of that stuff. I think someone called us like we were like these forefathers who kind of started it with blending the shred stuff with metal."

For the first time ever, the IMPELLITTERI back catalog 1987-2010 has just been made available worldwide via Global Rock Records. Despite being a full American metal outfit, the IMPELLITTERI catalog has been hard to pin down for Western fans, with many having to buy expensive import copies direct from Japan, where Chris enjoys a huge following. Now this has changed with Global Rock Records officially licensing the full catalog between the years 1987 and 2010.

In celebration of this occasion, Global Rock released "Wake The Beast", a three-CD set that encompasses the IMPELLITTERI story from 1987 to 2010. Every song here selected by Chris himself as to what he feels are the highlights from some 12 different releases.

This is the first-ever IMPELLITTERI career-spanning compilation released worldwide, featuring not only the well-known album tracks, but rare Japan-only release bonus songs, B-sides and more.