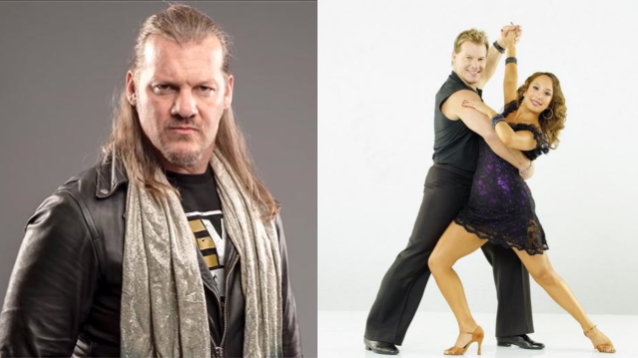 During a recent appearance on the "Kicking It With The Koves" podcast, FOZZY frontman and wrestling superstar Chris Jericho reflected on his experience transitioning from the wrestling ring to the dance floor on season 12 of "Dancing With The Stars" in 2011.

"Dancing With The Stars" is one of the most popular shows in the United States. It features a whole host of celebrities competing to be the best dancing couple with their professional dancing partner. Dance couples look to earn votes from the audience and assigned judges.

Asked if he enjoyed his time on "Dancing With The Stars", Chris said (as transcribed by BLABBERMOUTH.NET): "I did, but it was hard, man. It is not easy to do. And I turned it down twice. 'Cause I was really good friends with Stacy Keibler, who was in the WWE, and she did 'Dancing With The Stars'. And she was a huge hit. If you go back and watch, she was one of the first kind of breakout stars from 'Dancing With The Stars'. Her legs were weapons of mass destruction, was what they called her legs. So she had a lot of influence on the show, and she kept suggesting me to the casting directors. And I turned it down a couple of times. When I finally accepted it, I remember I was on tour with FOZZY in Ireland and I was outside on the street talking about it. And I was, like, 'Listen, I've gotta do this. Because if I don't, I'll always wonder. And now I'm just a dick if I turn them down. They obviously really want me to do it, they really think that I can do it, so let me give it a try.'"

Despite his best efforts, Jericho was eliminated from the "Dancing With The Stars" competition one night after landing in last place on the hit ABC show. On an April 2011 episode, he and his professional dance partner, Cheryl Burke, collected 22 points out of 30 for a tango that one judge described as "cold, uneventful and a bit lumpy."

"I think one of the reasons why I did fairly good — I think I lasted six weeks or seven weeks — was because dancing is choreography, which wrestling has a lot of choreography, and you have to understand the timing of music: how to stay on the beat, stay off the beat, stay behind the beat," Chris told "Kicking It With The Koves". "And, obviously, as a musician and as a singer, that's what you've gotta do — you've gotta sing in time with where the music is, and that's kind of what dancing is as well.

"I don't think they expected me to do as well as I did," Jericho continued. "'Cause right out of the gate I have one chance to do something here. And it's hard — the first one is very hard. 'Can I do this?' And you do it, and you're just waiting for what the judges are gonna say.

"I enjoyed it, but, man, it was one of the hardest things I've ever done," Chris admitted. "Anybody that's done it, I don't care if you're on for one week or if you win the damn thing, it is not easy to be on 'Dancing With The Stars'. And you have to put the time into it… Even if you put the time into it, you still might not succeed. But if you aren't a hundred percent focused on this, you're not gonna last. And that's even if you have any aptitude for it, 'cause it's very difficult. It was a lot of fun, but it was very hard though."

Two months ago, FOZZY announced a fall leg of its headlining "Save The World" tour supporting its latest studio album, "Boombox". The 20-date trek, featuring special guests NO RESOLVE and GFM, will kick off September 8 in Columbus, Ohio and travel throughout the U.S. and Canada, stopping in such cities as Louisville, Pittsburgh, Milwaukee, Cincinnati, Charlotte, Richmond, Baltimore, Montreal, Toronto, and Philadelphia, before wrapping October 10 in Virginia Beach.