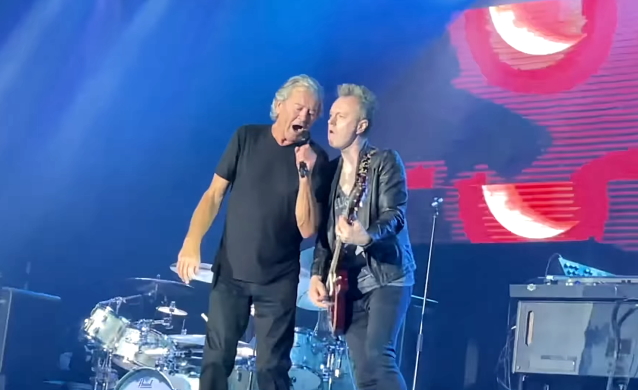 A German TV report on DEEP PURPLE's June 23 concert at Stadtpark Open Air in Hamburg can be seen below.

DEEP PURPLE's new touring guitarist Simon McBride, who has previously played with both singer Ian Gillan and keyboardist Don Airey, among others, is filling in for longtime DEEP PURPLE guitarist Steve Morse. Steve is taking a temporary hiatus from live shows but remains a full member of the band.

In a recent interview with VWMusic, Gillan stated about McBride's addition to the group: "[It's going] fantastic. Absolutely great. Everyone's full of energy. And when the band is cranking as we are, and the audience is giving you help, it's just wonderful stuff. And with Simon, it's just human chemistry. I mean, he's a professional. He's a great player. It didn't take him five minutes to mesh in with us. It was completely natural, and he slotted right in with no problem at all. We didn't even have to think about it."

Asked if Simon brings anything style-wise that's different from what he is used to with Steve, Ian said: "Well, he's not English. He's Northern Irish, so he's got that attitude, and that's different. For that reason, he's probably more compatible with the stuff that we used to play in the old days. But at the same time, he's handling the new material like it's nothing at all. I mean, he's handling this thing just absolutely brilliantly, and the audiences love it."