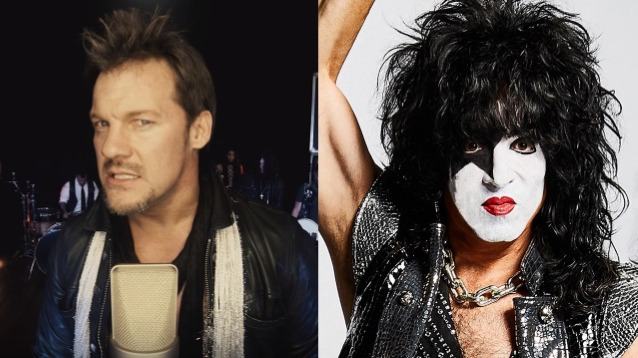 CHRIS JERICHO Defends PAUL STANLEY Over Lip-Sync Accusations: 'He's Singing His Ass Off As Much As He Possibly Can'

FOZZY frontman Chris Jericho has defended Paul Stanley's vocal performance on KISS's "End Of The Road" tour, explaining that the "Star Child" "has nothing to prove to anybody."

Ever since KISS's "End Of The Road" trek launched in late January, there has been persistent online chatter about Paul allegedly singing to a backing tape. The speculation stemmed from the fact that Stanley had been struggling to hit the high notes in many of the band's classic songs for a number of years.

During an appearance on the latest episode of the "Three Sides Of The Coin" podcast, Chris discussed claims that KISS is using pre-recorded tracks during its farewell tour, saying that Stanley is "singing his ass off as much as he possibly can."

Jericho said: "Paul Stanley has nothing to prove to anybody. He's one of the greatest rock and roll singers of all time. I think that's something that anybody would say. I would much rather have him use the technology that's available to not sound like he's hurting himself, which then makes me not enjoy the show as much."

Addressing lip-sync accusations directly, Jericho said that KISS is most likely doing what many other artists have done, which is incorporate backing tracks and click tracks to their performances, thereby enhancing the live shows and at the same time maintaining discipline.

"Let me tell you how things work," Chris said. "More people do this than others. I'm sure of it, 'cause I've seen it happen. When you're a singer, and some bands will do this where there's tracks being run and the singer will sing… Remember we used to hear the rumors that Robert Mason would sing offstage for Ozzy [Osbourne]? What they would do is Robert Mason would sing, and Ozzy would sing as well, and then the sound mixer, if you've got a great sound guy, would just blend Ozzy down if he was having a rough night and push Robert up in the mix. So it's not like Ozzy was just sitting there going, like, [makes humming noise], and fucking 'Iron Man''s coming out. It's a combination of the two. And that's kind of how they were doing it, I'm sure, with KISS or with a lot of bands — DEF LEPPARD does it too; you could tell. VAN HALEN did it as well on the last tour when Michael Anthony wasn't there. They're just blending the vocals. So, Paul is singing — he's singing his ass off as much as he possibly can. But if it's a rough time, they're just sweetening it a bit, kind of giving it a little bit of extra love, so, once again, Paul doesn't have to rip himself apart and the vocal sounds good. I'm not saying that's what they're doing, 'cause I'm not the sound mixer, but that's my guess as to what's happening."

Despite the fact that KISS is probably running backing tracks to enhance Stanley's singing voice, Jericho says that the KISS frontman "always gives it his all. The only problem was, the last couple of tours, his voice had… I'm not gonna say it betrayed him, but his voice wasn't up to snuff, and you could hear him hurting himself. We don't want that. You don't have to prove anything to me. It's not about lip syncing or not lip syncing — this is show business. If you wanna hear the song exactly the way that it's on the record, listen to the record. 'Cause if you're going to a KISS [show] to bitch about the fact they've got some background tracks, you're missing the point of what KISS is. 'Cause guess what? Paul is playing guitar, Paul is dancing, Paul is jumping around, Paul is still the greatest frontman of all time. And when Paul doesn't think he can hit those choruses, he sits out and lets the band sing them — Eric [Singer], Gene [Simmons] — and then he vamps over top of it. He's still singing. He's just doing his typical Paul Stanley [shrieks], whatever it may be. That's okay, 'cause that's still a rock and roll show, and that's why I'm there. If I wanna see pitch-perfect, amazing vocals, I'll go see freaking Adele and watch her stand there and not move and sing her pitch-perfect vocals, because it's a different type of a show."

According to Jericho, the reason so many KISS fans seem to have an issue with Paul possibly singing along to a backing track is very simple.

"I always say this — 'Star Wars' fans and KISS fans are all the same," he explained. "They are loyal to the death, they will buy everything and they'll complain about every single thing. That's just how it is. And I really believe that there's a lot of people that are gonna complain just for the sake of complaining, instead of just going to the show and just enjoying the show and having a great time and reliving the fact that this is one of the greatest rock and roll bands of all time still putting on one of the best productions you'll ever see."

Former SKID ROW singer Sebastian Bach recently defended KISS against claims that the band is using pre-recorded tracks during its farewell tour, saying that Stanley sang "his ass off LIVE" during a recent concert in California. "I have seen way more obvious use of backing tracks than with KISS," Sebastian wrote.

Most fans assumed that Sixx was referring to KISS, especially since Simmons has previously slammed bands who used backing tapes for not being honest enough to include that fact on their concert tickets.

After KISS played on NBC's "America's Got Talent" last September, Stanley was asked by Rolling Stone if that was actually a live performance or if he and his bandmates tracked it earlier. "What you tend to do is record it live and that way you know that everything is as it should be," he responded. "It's not like going into the studio or anything like that. It's…with all its imperfections, it's live."