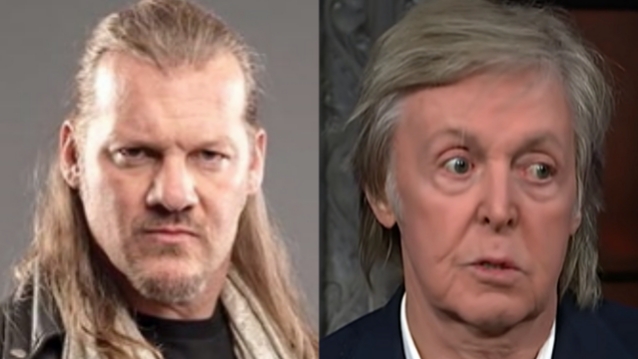 In a recent chat with ANTHRAX drummer Charlie Benante, FOZZY frontman and wrestling superstar Chris Jericho detailed his hilarious 2015 encounter with THE BEATLES legend Paul McCartney. He said (as transcribed by BLABBERMOUTH.NET): "When Ringo [Starr] got inducted into the Rock And Roll Hall Of Fame, I know [a lady who], she's not working for him now, but she was high up working for Jann Wenner, and her family were big wrestling fans and big Chris Jericho fans. So I happened to meet her at the Garden. And she said, 'Listen, if I can ever do anything to repay you…' 'Cause I'm always nice to everybody — fans, especially kids. And she was, like, 'Listen, thank you for meeting my kid. I work for the Hall Of Fame. If you ever need anything…' And it just so happens that was the year that KISS was going in. So I went with my cousin Chad, and we went and saw KISS get in the Rock And Roll Hall Of Fame. And we had so much fun, we said, 'Let's go every year.' We'll make it like an annual thing for me and him to go and hang out. So we went two or three years and then the one year Ringo got in."

He continued: "We're allowed to stand on the floor, 'cause Betsy from Rolling Stone gets us those passes. But there's nowhere to sit because you have to pay, like, 10 grand a seat to be at the tables. So we were in the back, and we kind of had to be walking here and walking there. And I noticed, though, when bands played, everyone stood up and no one knows who's supposed to be where. And my cousin is on it — we've doing this for years — so as soon as everyone stood up [to see] GREEN DAY [perform], I said, 'Let's go to the front.' 'Cause we had seen Paul and Ringo and Olivia — George's [Harrison] widow — and Yoko [Ono] at the very front at a table. So we walked straight to the front. I remember I saw Dave. 'Hey, Dave, how's it going?' Dave Grohl. Kid Rock. 'What's up, dude?' And people kind of staring at you, but you just act like you're supposed to be there. 'How's it going, man? Good to see you.' They don't know who you are. And we went right to the front, and I'm standing right behind Paul and Ringo. And there's energy; he's fucking godlike. And GREEN DAY was doing 'American Idiot'. And it goes [hums song's riff], 'Hey.' And everyone's going, 'Hey.' And Paul's doing it too — he's super into it: 'Hey! Hey!' So when it was done, he starts walking down towards the bathroom on one side of the tables, and I'm, like, 'Here's my moment.' And I'm walking down the other side of the tables. So we finally meet in the middle. 'Oh, wow, Paul. Nice to see you here. Wasn't GREEN DAY great?' 'Oh, they were great, man. It was awesome.' And I'm trying to think of something witty to say. He had a security guard in front of him. And I said, 'Listen, I see you've got your security guard in front of you.' I said, 'I'm behind you. So if any ninjas come to attack you, I'll fend them off.' And he was kind of looking at me, like, 'All right, man.' And then I go, 'High five, Paul,' and he high-fives me.

"So, go to later on in the night after the show was done, we go to the after-party," Jericho added. "And Paul is sitting with Joe Walsh and their wives. So Paul gets up to grab some cheese off the buffet and everyone comes around to kind of bother him and whatever. So I've done this before — I did it with Bill Murray; I actually did it with Lars [Ulrich] before we were friends — where I'll go up and say, 'Dude, you need help with these people if you wanna get outta here.' So I go over to Paul. I say, 'Listen, everyone's bothering you. If you need, I'll help you get you outta here.' And he goes, 'Listen, who are you? Are you a cameraman? Are you security? Who are you?' And he goes, 'Listen, if I need any help with the ninjas, I'll let you know. Until then, I'm cool. You got it?' And he was nice. But I think he thought I was some kind of stalker. And all I could think of when he said that was, 'Fuck. He remembered the ninjas! My line worked.'"

According to Chris, that marked the end of his encounter with Paul. "I was, like, 'He's had enough of me,'" he said. "And that's cool. It's all good."

A few years ago, Jericho told Classic Rock magazine that "THE BEATLES were the first band I was ever really into. The White Album is the perfect BEATLES record in terms of the variety and diversity, of the band. I discovered THE BEATLES when I was ten years old, I read all the books, I had all of the records, I was a fanatic and it's what really got me into rock 'n' roll specifically. This was like the early '80s, so it wasn't cool to like THE BEATLES, so I was an outcast, and it trained me for what I was supposed to endure when it came to heavy metal three or four years after that. I made my own BEATLES shirt using a picture from the newspaper."

He added: "People used to make fun of me because it wasn't JOURNEY or whoever was popular at the time in 1981-82. You had to make a commitment and make a stand if you were a BEATLES fan back then, which is so weird to think about now because they're universally acclaimed."

In May, FOZZY dropped a video for its first new song in two years, "Sane", which hit one million views in its first two weeks.