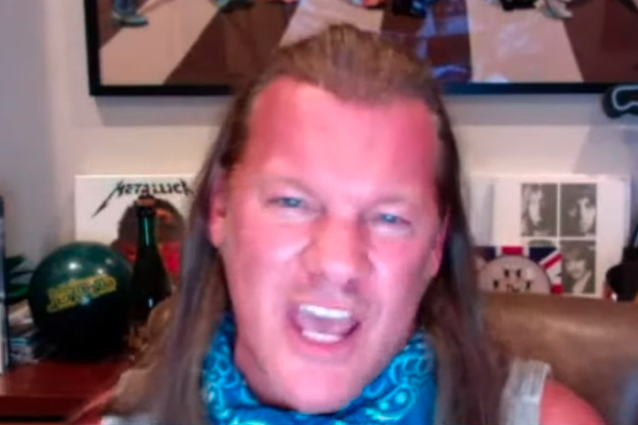 During last night's episode of "Saturday Night Special", Jericho's weekly live series which airs on his YouTube channel and Facebook page, Chris ended the show by tackling the chorus to "Youth Gone Wild", SKID ROW's first single from the group's self-titled debut album. Calling it "a tribute to a great band," Jericho sang the lines "They call us problem child / We spend our lives on trial / We walk an endless mile / We are the youth gone wild / We stand and we won't fall / We're one and one for all / The writing's on the wall / We are the youth gone wild" while clearly struggling to hit some of the highest notes. He later posted an extended version of his "Youth Gone Wild" rendition on Twitter, writing in a caption: "Saturday Night Singalong! One of my all time favorite tunes.... @OfficialSkidRow"

On Thursday (July 16),Jericho challenged Bach to a "singoff" with "no effects, no tuning, no bullshit" in response to Sebastian's claim that Chris "mimes to a tape" during FOZZY's live shows. "Bas is a great singer...but I'm better," Chris wrote on Twitter." The wrestler-turned-singer added: "I've never mimed anything ever! I will fucking sing in your face anytime, anyplace dude. I've been a fan & a defender of u since day one...but don't u ever question my rock abilities!" Bach fired back: " You're full of s*** bro. Every clip on the Internet is you miming to a tape. I will sing in your f****** face anytime. Wrestling is not rock and roll. I will show you f****** rock and roll. Check your texts set up The Sing-Off I am ready when you are"

In response, FOZZY guitarist Rich Ward called Sebastian "universally disliked" and said that seeing Bach "publicly go after the only guy that I have ever witness utter a nice word about him is sad."

Jericho has long been suspected of relying on backing tapes during FOZZY's live performances. When the band played in Canada in November 2018, several concert-goers accusedJericho of singing along to pre-recorded tracks. After a video of FOZZY's Toronto gig surfaced online, Bachweighed in, writing from his personal Facebook account: "Wow he mimes to a tape very well"

Saturday Night Singalong! One of my all time favorite tunes.... @OfficialSkidRowpic.twitter.com/cnIJOCS9Ok