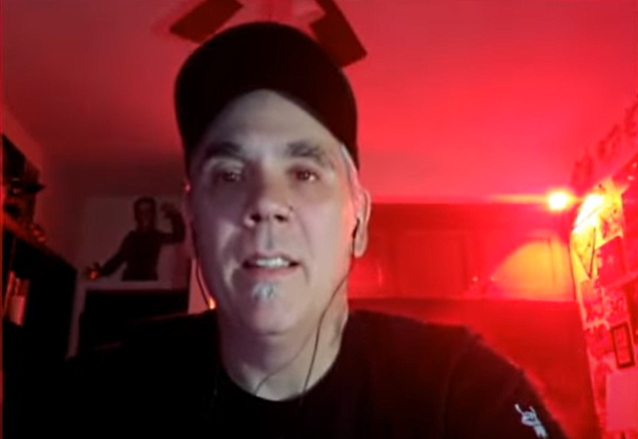 In a new interview with A&P Reacts, former MACHINE HEAD drummer Chris Kontos was asked what it was like to reunite with the band for the "Burn My Eyes" 25th-anniversary tour in 2019. He responded (as transcribed by BLABBERMOUTH.NET): "It was incredible. First, what happened was when Dave [McClain, drums] and Phil [Demmel, guitar] had left the band [in October 2018], I knew I was gonna get a call. My phone absolutely blew up with friends and family, and my e-mails and all my social media was, like, 'Wow, dude. Those guys left. And this is the 25th-anniversary year of 'Burn My Eyes'; this is uncanny timing.' And I knew I was gonna get a call. And I wasn't gonna call myself, but I knew that I'd be getting the call. And Joey [Huston, MACHINE HEAD's longtime manager] called me and he asked if I'd be willing to have a sitdown and talk about it. 'Yeah, Joe, I'd be glad to do that.' And we had an amazing conversation.

"When you're 20-something years old and you have conflict and you have two leaders on top of a mountain, you're like a couple of mountain goats," he continued. "And that's kind of where me and Robb [Flynn, MACHINE HEAD leader] were. We had our own vision of life and our own vision of where the band should go. But it was clear that it was Robb's band. And I struggled with that. He struggled with that. The other guys were kind of cast into the middle of that.

"You don't realize how much stuff you push down in life — especially when you're younger and you've got that bravado and machismo and the ego and everything," Chris added. "To exorcise all of that and to just pull that black sludge out and throw it on the table and look at it together, it was… I tell people this: even if it wasn't an option to go on tour with them, that conversation was so meaningful and cathartic for both of us to tell each other how much we truly mean to each other, how hurt we were after it was over. Robb said things to me I never thought that he felt, and likewise. And we were able to squash that beef and squash that time. Then we moved on to, 'Wow, we have a real opportunity here to not only progress MACHINE HEAD through this kind of rough moment for them, but also put a stamp on the legacy of 'Burn My Eyes'' and really own it — that it is a bit of a chalice of blood for the band. It always has been a benchmark. They've put out phenomenal records over the years, but there's that 'Burn My Eyes' moment that seems to hold fast.

"So, yeah, it was one of the most cathartic and cleansing and life-affirming moments of my life, getting back to go do that and to chill with the fans."

Last month, Flynn revealed that MACHINE HEAD would not resume its "Burn My Eyes" 25th-anniversary tour now that the pandemic is slowing down.

The "Burn My Eyes" 25th-anniversary tour saw Flynn and bassist Jared MacEachern play the band's classic debut album in its entirety for the first time ever, with original "Burn My Eyes"-era members Kontos and guitarist Logan Mader joining in.

Each show on MACHINE HEAD's "Burn My Eyes" 25th-anniversary tour consisted of two parts: part one saw Flynn and MacEachern performing alongside Kiełtyka and Alston; while part two featured "Burn My Eyes" played in its entirety.

MACHINE HEAD released a new three-song single, "Arrows In Words From The Sky", last month. Featuring the tracks "Become The Firestorm", "Rotten" and "Arrows In Words From The Sky", the effort was recorded at Sharkbite Studios in Oakland, California. Joining Flynn and MacEachern during the sessions were drummer Navene Koperweiss (ENTHEOS, WHITECHAPEL, ANIMALS AS LEADERS) and producer Zack Ohren.