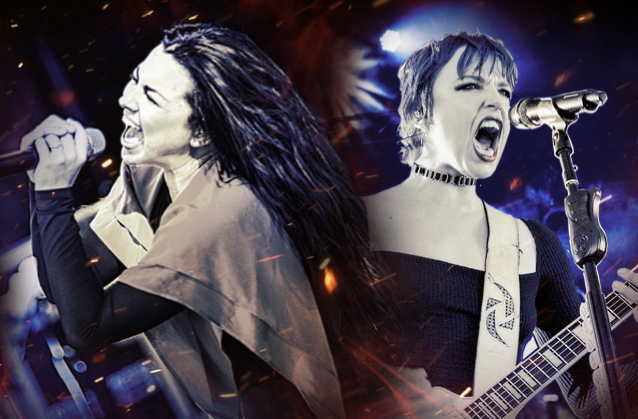 EVANESCENCE's AMY LEE On HALESTORM's LZZY HALE: 'We Love Each Other, And We Get Along'

EVANESCENCE and HALESTORM will share stages this fall with a new tour that brings together two of the hardest-rocking women in the genre, EVANESCENCE singer Amy Lee and HALESTORM frontwoman Lzzy Hale. Speaking to Matt Pinfield for the latest installment of 95.5 KLOS's "New & Approved" music series, Lee stated about her personal friendship with Hale: "It started with music. It worked out for us to go do some shows together. We hadn't met in person before signing up to do a tour together in 2012. And I remember we had some kind of joint press or meet-and-greet to do on that first day. And I went in there, like, 'Hey,' before the fans came in. And we just clicked immediately. She's really humble and really down to earth. She doesn't take all the glory too seriously. She takes herself seriously and respects herself. She's just a really cool person.

"I feel like it takes something… Obviously, being a good musician and being a good songwriter, it's all key, but there's something deeper that makes the real pros, like Lzzy," she continued. "And it comes from just a good heart — somebody with their shit in order, and their priorities are straight.

"We love each other, and we get along," Amy added. "We play hard and we work hard. So I'm very much looking forward… I'm looking forward to playing live music in general; I mean, everybody is. Everybody's been missing it so bad. But to be able to go back out for our first [tour] out with a whole group of people that we're friends with — the crew, the band, we love each other, all of us. So it's gonna be a really good time."

Produced by Live Nation, the The EVANESCENCE and HALESTORM tour will kick off Friday, November 5 in Portland, Oregon, and take the bands to arenas across the country before wrapping up in the Northeast right before the holidays. PLUSH will be joining for the first leg, and LILITH CZAR will open the shows for the second.

EVANESCENCE's latest album, "The Bitter Truth", debuted in March as the #1 Current Rock and Alternative album in the U.S., and the band will bring audiences a high-octane rock energy to match the album, which the Los Angeles Times hailed as their "fiercest songs to date." Consequence Of Sound said of "The Bitter Truth", "Amy Lee and company triumphantly return … and it's certainly worth the wait," and the shows with HALESTORM this winter will further prove it.