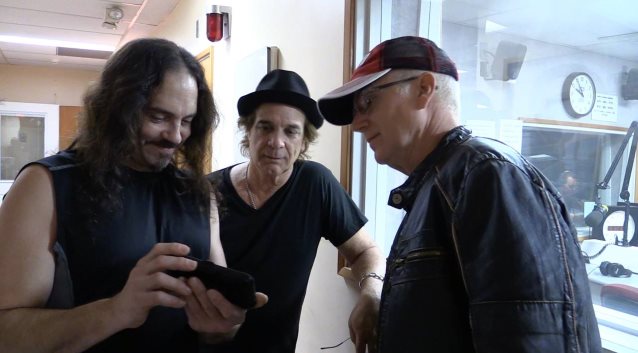 CHRIS POLAND Opens Up About NICK MENZA's Final Moments: 'It Was The Best I've Ever Heard Him Play Drums'

Former MEGADETH and current OHM: guitarist Chris Poland says that Nick Menza was a great person who "would do anything for anyone."

On May 21, 2016, the ex-MEGADETH drummer collapsed after suffering a heart attack during a concert with OHM: and was pronounced dead upon arrival at the hospital.

Menza hooked up with OHM: in 2015 after the passing of the band's previous drummer, David Eagle, who suffered a heart attack and had open-heart surgery in May of that year.

In a recent interview with the "As The Story Grows" podcast, Poland spoke about how he first met Menza. He said: "Nick was there when I did the ['Rust In Peace'] demos. I shook his hand and said hi, and that was the only interaction between us. When I started playing with Nick [in OHM:], we became fast friends, and if I had went to lunch with Nick [in 1989], I probably would have joined the band. But it wasn't meant to be. Me and Nick would have hung, and Dave [Mustaine] and Dave [Ellefson] would have hung, just like before. But I don't think Nick had anybody to hang with, because Marty [Friedman] was very introverted. I'm not exactly sure, but I think Marty was more a consummate professional, and did not eff around a lot."

Poland said that the initial plan was to form a band with Menza and former MEGADETH bassist James Lomenzo. "Nick's manager started calling me and saying, 'Hey, do you want to start a project with Nick Menza?'" he explained. "When I first got the call, I was like, 'I don't know. Maybe I do.' He kept calling and calling and calling, so I finally agreed. It was going to be me, Nick and James Lomenzo. I thought, 'Hey, this is cool. This could be cool.' So me and Nick and James get together, and we're starting to work some stuff out, and now I've got a fire under my ass. I'm writing as many songs as I can, and I really like what I'm writing. One day, James comes in and goes, 'Yeah, I had my people kind of count the beans here, and they said even if we do something, I'm not going to make any money. But I'm still willing to help you along with the project.' He leaves, and we're like, 'Man. Do you want a guy like that in the band? Don't you want somebody who would go to the end?' You want somebody who's going to be there hanging on to the end, that's going to give their all. So me and Nick just kind of said, 'Well, we're going to have to look for somebody.' Then all of a sudden, David Eagle passed away. It was terrible. God bless him, man. He was one of the best drummers who ever lived."

He continued: "We wanted to do a benefit for Dave's son and ex-wife. So we're kicking around how we're going to do it, and one day, I just said, 'Hey, Nick — do you think?' He goes, 'Yeah, man, I can try — I can try to play that stuff.' So we started rehearsing, and he just kept getting better. Every rehearsal, it was getting better and better and better. He goes, 'Dude, let's just do this.' I said, 'Okay. I'm not opposed to that,' but we still had all the stuff we wanted to get a vocalist on. We had a lot of things on different burners. Any way we wanted, we could go. And so, we did the benefit. Nick had a blast. If he dropped the ball on something, at the end of the song, he'd go, 'Fore!', like when a golfer hits somebody in the head. Then he got so good, man — he just was nailing it. He brought the band to a different place that we're trying to stay at now. He just gave it muscle, and he made hard parts that were in, like, 7/8 sound like you could dance to it, where it wasn't like math anymore. It had soul."

Poland also talked about the night that Menza passed away during an OHM: concert at The Baked Potato in Studio City, California. "We're there; we soundchecked; everything's cool. Nick goes with his tech, they go get something to eat; he gets back, and we go on stage, and it's like a different drummer arrived. I had been playing with Nick for a couple of years now, and he's playing the drums like I had never heard him play drums before. Not even close. I'm trying to keep up with the intensity. It's not the volume intensity; it's just how intense he was playing it. It was loud, too, but it was something — he had a fire under his butt. It was the best I've ever heard him play drums. In my head, when I think about it now, it's like, every other time I heard him play drums, he was holding back. He was playing half what he played that night at The Baked Potato. We get to the end of the first song, and I look at him, like, 'What is going on with you?' He just laughed. We get to the end of the second song, and I'm sweaty, already. Normally, I'm not sweating until the fourth song. I got sweat dripping off my nose, and he's still laughing. We get to the end of the third song, which I think was 'Peanut Buddha', and now him and Pag [bassist Robert Pagliari] are laughing at me because I'm totally disheveled and soaking wet. My guitar, where the right arm is hitting the body, is all wet. I'm drying myself off, and he goes, 'Dude, are you okay?' I go, 'No, I'm good.' He tightened his hi-hat, and he sat his hands down on his lap, and then he just leaned over into the monitor. I thought he was fucking with me. He's still there, and I said, 'Hey, man, let's go.' I thought, 'Of course he's messing with me.' I said, 'Nick, come on, man.' I look over, and his eyes are open. That's when I knew that something had happened. I couldn't believe it."

Asked how he thinks Menza should be remembered, Chris said: "I loved him, man. He was the best. He was such a good person. He would do anything for anyone, and if he was your friend, you knew it and you knew that no matter what you asked, he would do it. He was an old soul, man. He was crazy in a good way. Anything he set his mind to, there was no even thought of failure. When he met Mustaine, he thought Mustaine was giving him a drum gig. Mustaine gave him a gig being a drum tech. Not to be outdone, he said, 'Okay, I'll tech for this guy.' He would tech and soundcheck the drums, and it probably took Dave two, three soundchecks to realize that he had a monster drummer as a tech, and an adequate drummer in the band. The rest is history."

The full conversation can be streamed at this location.

For the past 20 years, Poland's main musical focus has been OHM:, which has released three full-length studio albums to date.