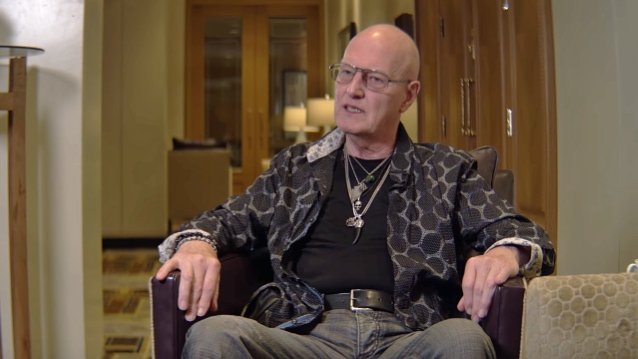 Asked by United Rock Nations what the "mood" is like right now within the AC/DC camp, Slade responded (see video below): "It was very sad when Malcolm [Young, AC/DC rhythm guitarist] passed, of course — very, very sad. He was a genius — an absolute genius. And the combination of him and Angus was magic — it was a magic combination. And, of course, the same with Cliff [Williams, bass]. It's sad [he left], but I understand. He wants to go fishing [laughs] all the time. His son is a fisherman, so he wants to enjoy time with his children and maybe grandchildren — who knows? [Laughs] He's been there 40 years. But the thing is, you must remember there's been five years between every album and tour.

"The mood, it's absolutely fine," he continued. "The last time time I saw the guys was at the end of the 'Rock Or Bust' tour. Yeah, everybody was fine. Malcolm hadn't passed yet, and, of course, I'm sure it hit Angus very, very hard — as with all of us, actually. And just before him, brother George [Young] also died, so it was a very sad time. So I think the mood is probably appropriate for those things that have happened. And as people say, time is a great healer. So you never forget them."

Asked what the future holds for AC/DC, Slade said: "You'll have to wait and see. Along with everybody else — including myself."

Based on the recent photos that have surfaced online from Warehouse, the assumption is that AC/DC is in the midst of making — or at least planning — another album, with Rudd and Johnson both back in the lineup.

Ever since AC/DC completed the tour cycle for its 2014 album "Rock Or Bust" nearly two years ago — a turbulent trek that weathered the forced retirement and eventual death of co-founder Malcolm Young, plus the departures of Johnson, Rudd and Williams — fans have wondered whether sole remaining founding member Angus Young would keep the band going or decide it was time for AC/DC to pack it in.

Rudd's spot behind the kit for AC/DC's "Rock Or Bust" world tour was taken by Slade in 2015 after Rudd was arrested for drug possession and threatening to kill an employee.

Slade followed Simon Wright in AC/DC's lineup, joining in time to play on 1990's "The Razor's Edge" album. When Rudd returned in 1995, Slade was shown the door and harbored some bad feelings about that for a while. Although he's 71, he still hits the drums as hard as ever.