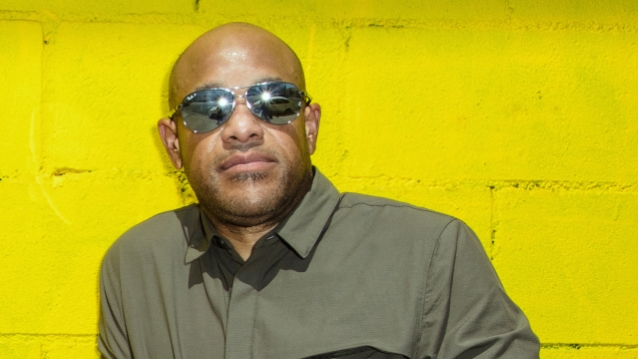 Ex-KILLSWITCH ENGAGE Singer HOWARD JONES On JESSE LEACH: 'It's Cool To Call Him A Friend'

Howard Jones says that "it was cool" to "hang out" with his former bandmates in KILLSWITCH ENGAGE last weekend.

Jones made appearances during KILLSWITCH ENGAGE's two concerts at the O2 Arena in London, England on August 10 and August 11, dueting with current KILLSWITCH frontman Jesse Leach on the group's classic song "The End Of Heartache".

Asked by Antihero Magazine how the onstage reunion happened, Jones said (see video below): "Adam [Dutkiewicz, guitar] hit me up and said, 'Hey, you wanna be my girlfriend for the London shows?' And I said, 'Okay.' That is literally how it happened. So I came, showed up, hugged everybody, Jesse was, like, 'Dude, you remember the lyrics to 'The End Of Heartache'?' I'm, like, 'Hell no!' But I remembered them.

"That's honestly what it was," he continued. "We're family. The band — Jesse, Mike [D'Antonio, bass], Adam, Joel [Stroetzel, guitar], Justin [Foley, drums] — we're family. So it was cool getting to hang out with my boys again. And I just love 'em."

According to Howard, there is no awkwardness between him and Jesse when they hang out. "He's a great guy," Jones said. "Seriously, he's just a nice dude. There's no other way to explain it — he's so nice. But, yeah, it's been great, man. We've got a lot of similarities, so it's just… That guy, it's cool to call him a friend."

Jones is currently the frontman of LIGHT THE TORCH, which recently released its debut album, "Revival", after issuing two efforts under its previous name, DEVIL YOU KNOW.

Howard recently recorded a guest appearance on a new KILLSWITCH track, to be included on the band's next album. Leach revealed that he wrote the lyrics to the track several months ago "with Howard in mind and our connection through our similar mental illnesses." He explained: "I mean, now that I've hung with this guy a few times, it's 'crazy' (pun intended) how similar we are. We are brothers in metal, anxiety, hardcore music, love of medicinal marijuana and fighting depression.