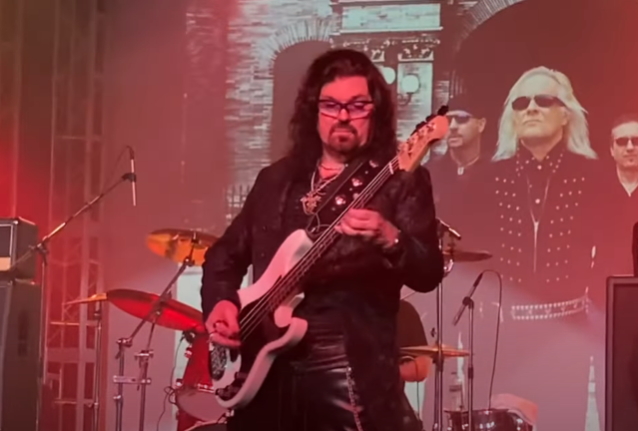 More than five months ago, Bloodgood suffered a hemorrhagic stroke and subsequent brain bleed. He was airlifted to hospital but never fully recovered.

"After a gallant fight that began with a severe hemorrhagic stroke in February 2022 he's gone home to be with our Heavenly Father," the band wrote in a social media post.

"We'll cherish Michael's generous spirit, off-beat sense of humor, and musical soul. His devotion to the Lord and sharing of the Gospel through his ministry as a pastor and musician touched countless lives."

Michael is survived by his wife of 46 years, Marilyn, their three sons and two grandchildren.

In a May post on the GiveSendGo fundraising web site, it was reported that Michael had begun speaking and was communicating with doctors.

BLOODGOOD was touring at the time of Michael's stroke and had been working on new material.

Though Bloodgood didn't intend on forming a Christian heavy metal group in 1984, that's what the music industry labeled them. Unfortunately, its faith-based lyrics caused a stir in mainstream music, especially among hard rock bands who thought BLOODGOOD was too soft for its ear-piercing, rocking genre. In addition, Christians believed BLOODGOOD's music was the evil doings of the devil and banned its music and picketed its concerts in the cities it toured.

BLOODGOOD pushed all that adversity aside and became one of the top four Christian heavy metal bands by 1988. The band's later lineup included guitarist Oz Fox, a member of STRYPER, arguably the most popular Christian metal band in music history.

In 1986, the band released the platinum-selling record "Detonation". They've also issued five other albums, including their latest, 2013's "Dangerously Close". In 2010, BLOODGOOD was inducted into the Christian Music Hall Of Fame.

In his biography on the BLOODGOOD web site, Michael wrote: "My musical direction took quite a different route half-way through my senior year in high school when I gave my life to Christ. Suddenly, all I wanted to do was to share my new life and spread the Gospel using rock 'n roll music, so the following year I started my first Christian band, CROSSROADS. There was very little contemporary Christian rock in those days that we were aware of, so we began rearranging old hymns by putting in rock guitar hooks, doing cover songs like 'Jesus Is Just Alright'. We played anywhere and everywhere we could, including parks, Christian coffee bars around Southern California and making our way down to the Naval Training Center in San Diego to share our faith with the sailors-in-training. The first time we played in a church, some folks walked out before we began when they spotted my electric guitar, considering it a 'tool of the devil'!"

Dear, Friends - It's with a heavy heart we share that we lost our beloved, Michael Bloodgood at 8:15am Central this...