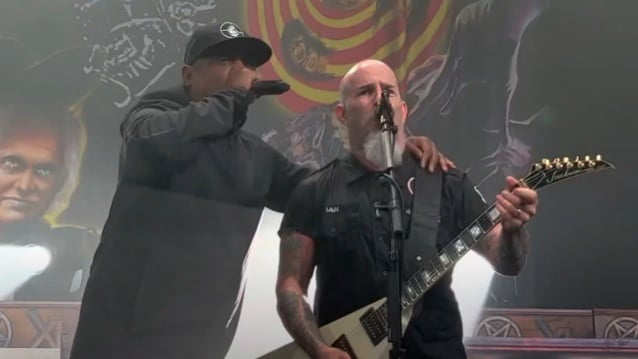 Watch: ANTHRAX Joined By PUBLIC ENEMY's CHUCK D For 'Bring The Noise' At Palladium In Hollywood

Chuck D of PUBLIC ENEMY joined ANTHRAX on stage last night (Friday, July 29) at the Hollywood Palladium in Hollywood, California to perform "Bring The Noise", the song ANTHRAX and PUBLIC ENEMY recorded together in 1991. Fan-filmed video footage of his appearance can be seen below.

During the recording of ANTHRAX's "Persistence Of Time" album, guitarist Scott Ian suggested the band — all big PUBLIC ENEMY fans — record a cover of PUBLIC ENEMY's "Bring The Noise". He loved the idea of recording a metal version of the song, of melding his guitar sound with Chuck D's voice, plus, PUBLIC ENEMY had name-checked ANTHRAX in the lyrics. Once the demo was arranged and recorded, Scott sent a cassette of it to Chuck D with the pitch for Chuck and Flavor Flav to record a version of the track with ANTHRAX. After hearing the demo, Chuck D wholeheartedly agreed. In June, 1991, the ANTHRAX-PUBLIC ENEMY collaboration of "Bring The Noise" was released on ANTHRAX's B-sides/rarities album "Attack Of The Killer B's", and then on PUBLIC ENEMY's "Apocalypse 91...The Enemy Strikes Black" album in October of that same year. The song blew up, and received a Grammy nomination for "Best Metal Performance." Then, on September 24, 1991, as part of ANTHRAX's "Persistence Of Time" touring cycle, the two bands went out on the road together, the "Bring The Noise Tour" — ANTHRAX and PUBLIC ENEMY, with PRIMUS and the YOUNG BLACK TEENAGERS supporting. The shows ended with ANTHRAX and PUBLIC ENEMY on stage together performing "Bring The Noise".

Asked in a 2013 interview with The National Student if he thinks the backlash in the collaboration ANTHRAX did with PUBLIC ENEMY helped to form any of the nu-metal music today, Ian said: "You know, people ask us, do we think we created certain genres of music that the press named after we did what we did with PUBLIC ENEMY. I never thought we invented it. It certainly opened a door, even just a window for people to jump out of. I truly believe that RAGE AGAINST THE MACHINE were the band that drove a train through that door; they took the influences in their individuals and came together to make a band out of it. Whereas with us and PUBLIC ENEMY, it's not like ANTHRAX became a rap group and it's not like PUBLIC ENEMY became a metal group, we just collaborated together and did something great. We didn't then become one unit and continue to make music like that. Whereas, RAGE AGAINST were that unit and this is the music that they were creating from their souls which blew up massively on a worldwide level. So I think if anything, whether or not they'd want the credit for it, it's definitely RAGE AGAINST THE MACHINE for me that created rap metal, nu-metal, whatever you want to call it. Everything that came after them showed that a direct line had to go back to RAGE. The only thing I can personally take credit for is, there have been guys in bands that have come up to me and personally told me the influence that we bring to them specifically some of the dudes from LINKIN PARK told me years and years ago that the first concert they ever saw was ANTHRAX and PUBLIC ENEMY in Los Angeles. And they left that show saying that's the kind of band we want me to make. I know the guys in RAGE AGAINST THE MACHINE and I know Tom [Morello, guitar] and he was a fan of ours and PUBLIC ENEMY's and what we did. I'm not saying 'Bring The Noise' was a direct responsibility for RAGE, but I know that it's something they are certainly fans of."

In a separate interview with the Cleveland Music Examiner, Ian stated about ANTHRAX's original decision to record a cover of "Bring The Noise": "By that point, there was a new audience, and we certainly reached a lot of new people with that PUBLIC ENEMY track. People who maybe weren't into what we'd done before, or who weren't metalheads. So that track crossed over for us and took us into a new zone. But it's funny, because we haven't done anything rap or crossed over since 'Bring The Noise', yet people once again still talk about it, which shows me how special it was. People still want to hear it and people still reference it all the time, and it's almost 25 years old. And sometimes we're categorized as a 'rap metal' band, when we only ever did the two songs — other then maybe screwing around with 'Looking Down The Barrel Of A Gun' with the BEASTIE BOYS as a B-side — but yeah. People still talk about it as if that's what we do." 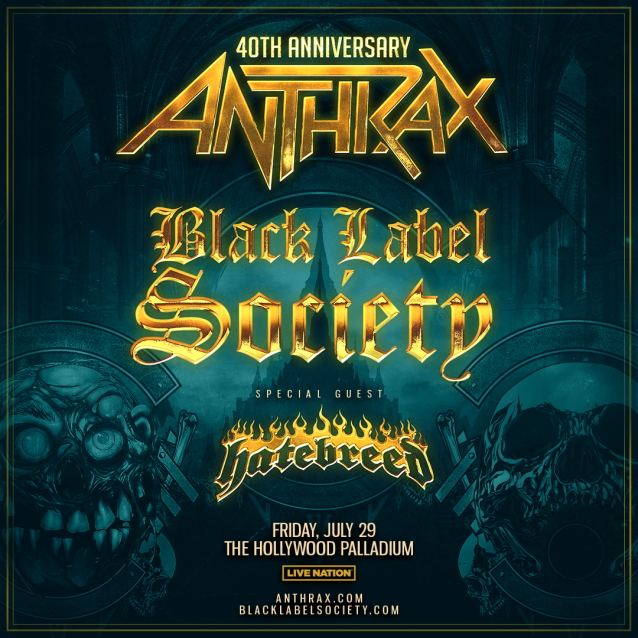