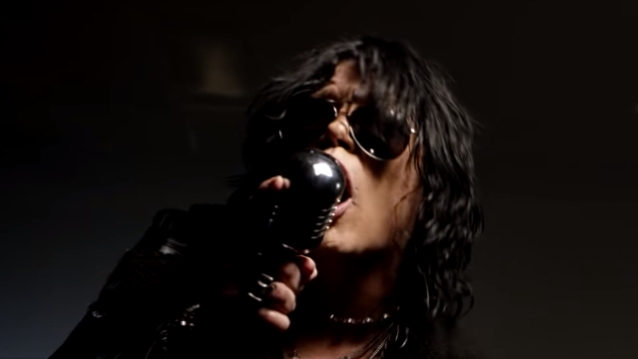 Tom Keifer has completed work on his second solo album for a tentative late 2019 release.

The CINDERELLA frontman spoke about the follow-up to his acclaimed debut solo LP, 2013's "The Way Life Goes", during an interview with Meltdown of Detroit's 101 WRIF radio station.

"In terms of the dynamics of the record, it's what you would [expect to hear from me]," he said (hear audio below). "I always like to make a record that's a journey, that encompasses very heavy songs and ballads and mid-tempos and stuff. So it has all of that on it. I would describe the extreme ends of the record — the heavier stuff is probably the heaviest stuff I've been involved in writing and recording to date, and I would say that the more organic stuff is probably the rawest and stripped down and organic as it's ever been. So given those two extremes, I think that they go further than they ever have in terms of heaviness versus organic and intimate, stripped down.

"I think what's really cool about this record is that I recorded it with the band," he continued. "Our goal was to capture the energy and the chemistry that this band has in the studio, and I think we've managed to do that. We were very careful to not overproduce the record, and we were just going for raw energy and real emotions. So it's raw and it's got a lot of energy and a lot of emotion."

According to Tom, his new solo album features no special guests or outside musicians. "It is one hundred percent the #keiferband, the seven of us," he said. "Not even a percussionist — nothing. Everything is our band."

Keifer also touched upon the business issues that resulted in "The Way Life Goes" being temporarily unavailable, with the album eventually receiving a deluxe reissue in late 2017.

"'The Way Life Goes' did have a great kickoff, and we had great success with both 'Solid Ground' at rock radio and 'The Flower Song' was played on a lot of different formats — from Top 40 to triple A. So we had a great kickoff on that, and the label was very committed in the beginning. It was more of, shall we say, a corporate shifting around that caused that label to go under, and in the process, we almost lost the record and it was pulled off the shelf. So there was a little bit of litigation and we managed to negotiate back the masters, and that was the point of the deluxe release — to re-release it, to get it back on the shelves, 'cause it had been removed for awhile. But the initial kickoff was great. The label was great, they really believed in it, and they put a lot of time and money into promoting it, and then things went a little bit south with the owners of that company. So, like I said, we were fortunate to get the masters back, which that was a little scary for a minute, and when we did, we thought we would repackage it a bit and just get it back up on the shelves, and that's when we did the bonus tracks. And that was a lot of fun to do. That was the first time, actually, we had recorded the new band. And now Cleopatra is the label. I have a lot of history with them; I've done projects with them in the past, with CINDERELLA. And they were also the ones who picked up the re-release of the deluxe edition of 'The Way Life Goes' and released it. So, we have a good home there. They're a solid label and good friends and real believers. So they're doing the new record too — they're releasing the new record."