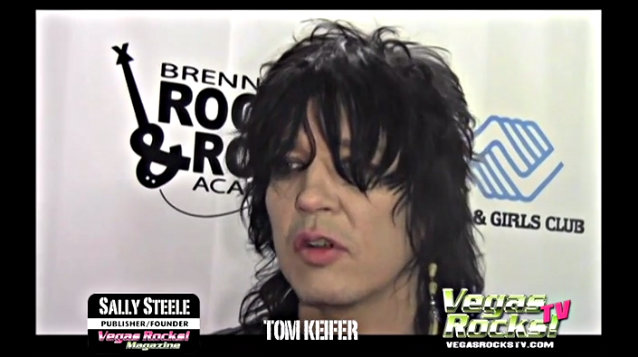 Alice Cooper, Dee Snider (TWISTED SISTER), Vince Neil (MÖTLEY CRÜE), Tom Keifer (CINDERELLA), Rob Zombie and all four members of KISS are among the musicians who performed on December 5 at a concert and live auction to raise money for the Brennan Rock & Roll Academy at The Orleans Arena in Las Vegas, Nevada. They played with '80s and '90s cover band HAIRBALL to help the future of rock 'n' roll; the children.

A backstage interview with Keifer conducted by Sally Steele, publisher of Vegas Rocks! Magazine, can be seen below.

Keifer's debut solo album, "The Way Life Goes", sold 5,400 copies in the United States in its first week of release to land at position No. 78 on The Billboard 200 chart. The CD was released on April 30 via Merovee Records (through Warner Music Group's Independent Label Group).