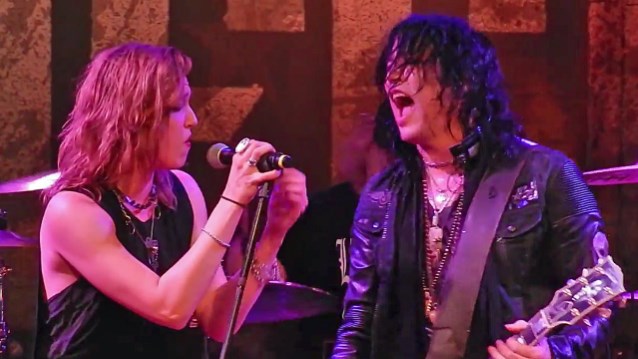 Jacky BamBam of Philadelphia's 93.3 WMMR radio station recently conducted an interview with CINDERELLA frontman Tom Keifer. You can now listen to the chat at using the audio player below.

Speaking about the gift he gave to HALESTORM frontwoman Lzzy Hale for her 30th birthday, Keifer recalled: "It's funny. We've become friends since we did… That first show [HALESTORM and my solo band] did together was in Atlantic City. You know, she told me how she'd been inspired by my guitar playing and singing in CINDERELLA and that stuff, and it meant the world to me. And we've just become very close friends since then. Honestly, the whole band HALESTORM and my solo band are all big buds. So we were hanging out last fall, and it was her birthday — it was in October, I believe it was — and we were going out to all hang. And I was kind of looking around in my jewelry box and I saw this pin that I'd had [that I originally wore on the cover of the CINDERELLA debut album 'Night Songs', that I don't even remember when I took it off the jacket. And I just knew that she would like that, and I knew that she would know what it was, so I gave it to her for her birthday. And she loved it. And she surprised me by wearing it on [HALESTORM's 'Into The Wild Life'] album cover, which was just the coolest thing ever."

Lzzy talked about the gift she received from Tom during a recent interview with WMMR's Jaxon. She said: "My birthday last October, we got together, and [Tom's], like, 'I found something, and I want you to have it. And it's not really big or great, but I know you'll know what it is.' And he hands me this little pouch, and it's a piece of costume jewelry. It's a pin that he wore on the cover of 'Night Songs'. And he's, like, 'I want you to have this. Because I don't even know why I saved it, but you're gonna appreciate this more than anyone else…' So, I decided to surprise him and wear it on our cover for 'Into The Wild Life'. So, I did. And it was so funny, 'cause we were working with a stylist [during the photo shoot for the 'Into The Wild Life' cover], and I'm, like, 'I brought this pin… I don't care who you are or what's 'in style' right now, but you have to make sure that I'm wearing this.' So I did, and then the album came out, and he's, like, 'Lzzy… Is this [the pin I gave you]?' And I'm, like, 'Yeah. Tradition man! We've gotta role that through!' So it's really nice." 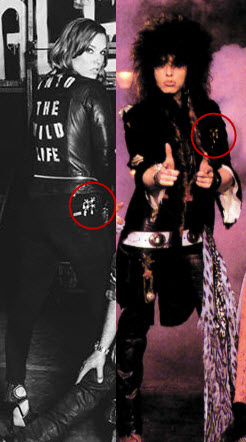 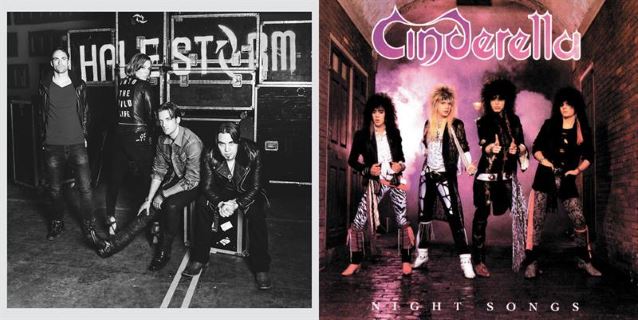 Tom Keifer talking to WMMR's about his gift to Lzzy Hale (audio):

Video footage of Lzzy Hale performing CINDERELLA's "Nobody's Fool" with Tom and his solo band in Nashville in May 2015: