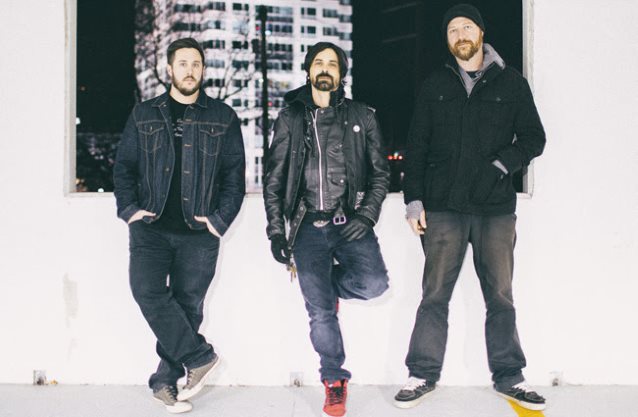 CKY Signs With ENTERTAINMENT ONE MUSIC

American rock act CKY has signed a worldwide record deal with Entertainment One Music (eOne Music). The band's new full-length album will be released this summer.

Scott Givens, SVP of eOne Music, says: "All of us at Entertainment One are elated to have CKY join us and are looking forward unleashing their amazing new record this summer."

"We are thrilled to be working with one of the most progressive record labels in the music business today," adds CKY vocalist Chad I Ginsburg. "CKY are looking forward to a long partnership in great music for the entire world with eOne!”"

CKY just announced a slew of tour dates highlighted by a summer long trek with the 2017 Vans Warped Tour. This is the band's first time returning to the Warped Tour since 2000.

But first the band will head over to the U.K. to do thirteen-show run, some of which dates are already sold out. This will be the first time the band has been back to the U.K. since 2009. CKY will then head to Canada for ten key shows from Quebec all the way to Vancouver.

Chad I Ginsburg, the band's guitarist and singer, steps into the frontman role with charisma, charm, and bravado, confidently delivering a diverse performance as he claims a position that was clearly rightfully his to own. He's joined in enduring partnership and musical and personal chemistry by fellow CKY cofounder Jess Margera, the drummer whose extracurricular work in projects like THE COMPANY BAND (with guys from CLUTCH and FIREBALL MINISTRY) expanded CKY's horizons as much as Ginsburg's solo work has as well. The duo returned to their primary project refreshed and re-energized, with bassist Matt Deis (ex-ALL THAT REMAINS),who first joined CKY in 2005.

GUNS N' ROSES, METALLICA and DEFTONES have all personally invited CKY on tour, cementing a legacy as a hard-charging live act. CKY built a worldwide fanbase of dedicated acolytes, friends, and supporters, lovingly dubbed the CKY Alliance, with a broader group of musicians, athletes, and other creative types in the CKY family, both literally and figuratively.

"We're grown adults now with an eagle-eye perspective on who we are, what we do, and how to do it right," Ginsburg declares, with matter-of-fact certainty. "None of us are out there in the clouds. We're pretty well-grounded people that have an honest perspective on where we're at."