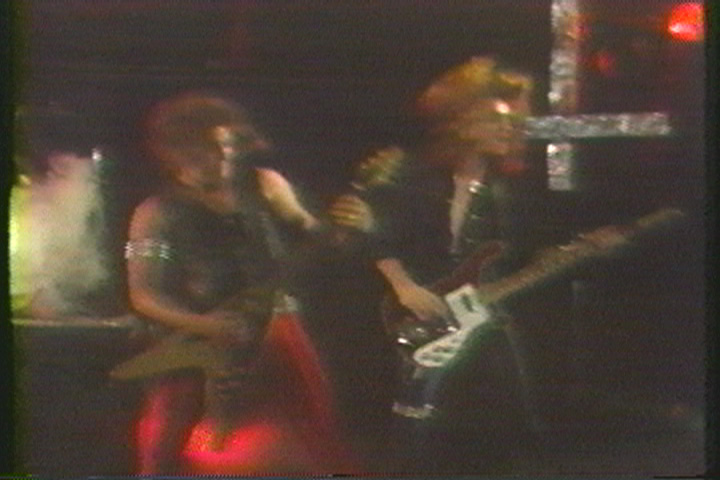 A former bandmate of late METALLICA bassist Cliff Burton has contacted BLABBERMOUTH.NET to set the record straight about a rare video of Burton performing with his pre-METALLICA band TRAUMA that was recently made available online.

The video, which captures a performance that was said to have been recorded the day before Burton met METALLICA drummer Lars Ulrich, is currently being offered by the tape's original "director", Don Wrege, who recorded the footage after he was hired to direct what he says was supposed to be "a long-form music video" for TRAUMA in 1982.

Calling Wrege an "opportunist" and accusing him of "trying to make a fast buck," TRAUMA's former guitarist and founding member Mike Overton (video image of Mike and Cliff) offered BLABBERMOUTH.NET the following exclusive account of Cliff's final days with TRAUMA and the circumstances behind the filming of the video which has been available online since early November 2003:

"First of all, I was able to contact TRAUMA's former lead singer Don Hilliar [to get his thoughts and reaction to the news that the video was being sold online]. I hadn't spoken with him for years, [so] it was great to catch up on how we were both doing. He still sings, and his new project is an IRON MAIDEN cover band. So some good has come out of all of this.

"This person Don Wrege, I barely remember as the director. Don Hilliar and myself both agree that this video should have not been released.

"First of all, it sucks! If I was the director, I surely wouldn't attach my name to it.

"The guitars sounded wimpy, the production quality was terrible, camera angles made us look about two feet tall, and so on.

"I am kind of embarrassed to have people think that this is what TRAUMA was all about.

"This Don Wrege certainly seem to know a lot about us for only being with us a couple of days. The only truth [in Don Wrege's account of what happened during the time that he spent with us] is the fact that Cliff was a little frustrated. Don Hilliar and I both knew this. Cliff had always wanted to be a little heavier in sound and so did I. The other guitarist (white [flying] V, I had the gold one, still have it.) and the drummer wanted to be a lot more commercial. I was always a MAIDEN, PRIEST fan myself. So there was some in-fighting going on among TRAUMA as what direction we needed to head.

"As for this video, don't get me wrong — it was a tremendous experience to go through. We learned a lot. Our supposed 'manager' at the time, Tony Van Lit, was not our manager at all —, we had fired him a few months before.

"We did this video with an understanding that it would be OK for Tony to shop us around at the record companies with it. Then we would talk about him managing us again. We met Lars and James [Hetfield] at the practice session for the video the night before the shoot. After watching the practice session and seeing Cliff play is when they approached him about joining the band. They were cool to talk to, although I did at the time wonder why they talked to Cliff so long.

"We did the video the next day, overdubbed the mistakes that night. Cliff never mentioned he had been asked [to join METALLICA] until a couple of weeks later, when we got back to the [San Francisco] Bay Area. He had talked to Don Hilliar and myself, explaining that he was thinking of leaving. He said he felt that METALLICA's music was more the direction he wanted to go. We had the show for the Troubadour coming up in a couple of months, so we asked him to hang on until then, plus we wanted to see if Tony could get us signed.

"According to Don Wrege, Lars met Cliff at the Troubadour show. Truth is, they had already been on the phone with Cliff and were making preparations to move up our way.

"You see, Cliff didn't have much time to talk after our Troubadour show [as] he was with a female fan in the hotel across the street. We had gotten into a fight with her boyfriend and had to rush [Cliff] out of there before the boyfriend found him. It was kind of funny actually. This girl leaving her boyfriend to be with Cliff that night. Him finding out and us fighting with him to protect Cliff. Well, the rest is history.

"METALLICA moved up our way [to the San Francisco Bay Area], Cliff left us, Tony did not get us signed, and he stole all the rented equipment from the Troubadour show, never to be heard from again. Don Hilliar and myself were contacted by the Sheriff's Dept. and Interpol, looking for Tony. We told them we had fired him as our manager months before, and they did not hold us liable for the equipment.

"Even after Cliff joined METALLICA, Cliff remained friends with Don Hilliar and myself. In fact, Don and myself were always on the guest list for METALLICA's shows. Their first show in the Bay Area was at the Stone in San Francisco. Don and I were both invited. When they went back to New York, Cliff would always call once and a while to let us know how he was doing and to ask how we were doing.

"You see, TRAUMA did not fall off the face of the earth after Cliff left. It actually took a couple of years to get our direction back. We hired a bass player almost immediately after Cliff left. Still did local venues. We made changes. Fired the [other] guitar player, drummer left, then the bass player. Each time Don and I reformed the band. We finally settled in with Ross Alexander on guitar, Chris Gustafson on drums, and Luke Advincula on bass. We hooked up with Shrapnel Records for a two-album deal and recorded and released our first album, 'Scratch and Scream'.

"METALLICA had just released 'Master of Puppets' and were doing the tour with OZZY. Don Hilliar and I were invited to the Cow Palace show and went backstage. Cliff had never forgot about Don and I. We got to hang out with Cliff and Kirk. It was a great night. Kirk reminded me of how he used to come watch me play at the Keystone Berkeley before he joined EXODUS.

"After the OZZY tour, METALLICA moved into the same rehearsal studios we were at in Hayward, Ca. it was great to hang with Cliff and Kirk. They would come watch us practice drink a couple of cold ones and basically shoot the breeze.

"Unbeknownst to Don and myself, this would be the last time we would see Cliff again. After a couple of months in Hayward is when they struck out on their headlining tour in Europe, and of course, you know the rest of the story.

"At the time, our album was getting great reviews all over Europe and the U.S. Kerrang, Creem, and some smaller European mags gave us great reviews. [But] the problem was with our record company Shrapnel.

"[Shrapnel head honcho] Mike Varney did not like the fact that an album he did not produce was doing better than the ones he did at the time. Kind of an EGO thing. So when Roadrunner Records came to us about re-releasing 'Scratch and Scream' on their label, he flipped.

"You see, releasing through Roadrunner would have lowered the cost for our Europeans fans. U.S. imports were expensive at the time. But we were under contract and stuck. We spent the next year or so trying to get out of it and TRAUMA just kind of folded. We had done some small touring in support of the album and we were getting a good fan base. But larger labels were still picky about signing metal acts.

"Even though we had great interest from Sharon Osbourne when she was working for Jet Records, we just couldn't shake Varney. TRAUMA died with our second-album demo. Don went off to sing with another band, I went into more production and studio engineering for other bands. I tried playing with other bands, but being the founder of TRAUMA, it was hard to get motivated again.

"As for Cliff, Don and I were invited to the funeral in Castro Valley. You see, no matter what has been said, Cliff was still a great friend. His parents were friends of ours also. In fact Don dated Cliff's sister for a while. It was a somber time at the funeral. It is hard to lose a friend like Cliff. We did have a good time reminiscing about Cliff at his parents' house after the funeral and I was glad to be there for loving support.

"I think the only opportunist here is this Don Wrege, for trying to make a fast buck.

"Don and I asked him politely to take the video off the Internet. It looks like he won't. You can see on the website he has made some changes to the story. His excuse for making a lot of this up is that he could not find out any info about TRAUMA after Cliff. Well, if you can't find the truth, make it up, I guess.

"Playing with Cliff was a great experience, he is the one that taught me how to headbang with the best of them.

"I can see a lot of Cliff's influence on [METALLICA's] 'Master of Puppets' album. In fact, a couple of bass lines are from songs that Cliff wrote for TRAUMA.

"For any TRAUMA or Cliff-knowledgeable people, they will remember the song 'Crusader'. I still remember watching him jam to Beethoven on his bass at his house. We had a great time when we were playing together. We really hit it off on stage, also.

"I have seen some information that even says we tried to glom on to METALLICA's coattails. That is not at all true. We never asked anything of Cliff after he left us, even when they became popular. You didn't see TRAUMA touring with METALLICA, and that is because we never asked. Maybe we should have, but Don Hilliar and I were not that type of people. We thought we needed to do things on our own — that is the way you earn it."