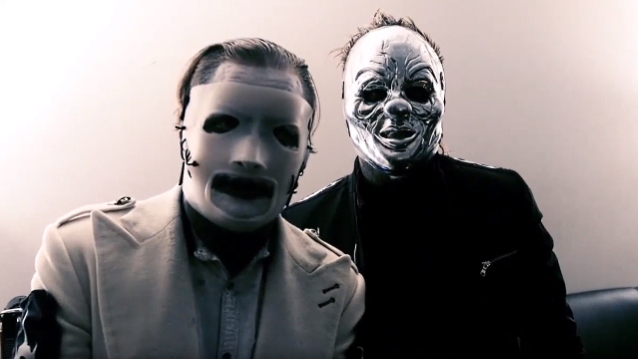 Download festival host Kylie Olsson caught up with SLIPKNOT percussionist M. Shawn "Clown" Crahan ahead of the band's inclusion in "Download: Reloaded" on June 5 and June 6 on Sky Arts. Clown discussed his year in lockdown, past Download performances, new music and more in this candid interview, which can be seen below.

Speaking about the material SLIPKNOT has written for the follow-up to 2019's "We Are Not Your Kind" album, Clown said (as transcribed by BLABBERMOUTH.NET): "I'm not gonna talk about how many songs [we're completed], because, honestly, I can't. But I can just tell you that I'm really happy, and the guys are really happy. [SLIPKNOT frontman Corey] Taylor is on some level of singing that I've never heard him, which makes me really emotional.

"Great music has been written, and because of that, my favorite singer on the planet has sang the songs," he continued. "And this is the first time we can go into a studio with completed lyrics. When I say 'completed,' I mean written, recorded, but he's still gonna have his time in the studio to project what he wants to for each individual song. So they're as done as they can be until he comes in.

"So, we're in L.A. That's about all I can say," Clown added. "And we're making God music, and we're having a blast. And it's just great to be around everybody, and everybody is in the best mood I've ever seen. It's a lot of fun being around the band; it's a lot of fun not being stressed or having anxiety, and just doing what we do, because we've done it for 20 years. And people are finally, like, 'Just do what you wanna do.' And that's unusual for us, because it's usually me going, 'No. This is what we're gonna do, whether you like it or not.' So now, it's just, like, 'Do what you want.' And, man, what a pleasant thing to receive after all these years. It's a beautiful thing."

Asked if the new SLIPKNOT songs are "different-sounding" to what the band has done in the past, Clown said: "I think what everyone would understand and agree on is that we, as the players or the artists that we are, we're always looking to solidify a certain awareness in us. So we've always pushed for being indifferent. Not on purpose, but to have the right to fully get this out.

"We have nothing to prove to anyone; we only have to prove it to ourselves," he explained. "And I've always believed that our fans, our culture, loves us because they can trust us. They might not like what we decide, but they're, like, 'At least you decided it, and we're gonna back it, because you thought about it.'

"So, is the music different? The music's always different. I wanna make different paintings. I don't wanna create the same painting. Familiarity is good, but recreating the same thing is not, in our opinion.

"So, what I can tell you is this for this album: I believe this album is the final album to exercise the right of what we're searching for. I think we're mastering it on this one. I think it's coming very easy. It's a trust thing.

"You can imagine, SLIPKNOT started as one thing, as zero, and then the expectation of us is at a million percent," he continued. "And that's not an expectation we put on ourselves; that's the world. So we have to keep a clear mind on what it is we're trying to do and not get focused away from anybody else.

"I think the songs people really love from SLIPKNOT, we call 'em barn burners. And those are songs like 'Surfacing'. We affectionately call them barn burners. That's what maybe the majority would like, but we sort of do that in our sleep. And if we only gave that to you, that SLIPKNOT formula, that recipe, something would be lost.

"So what I can say is I believe that this collection of [songs], whatever it ends up being as an album, I really believe it's gonna be the final — not an effort, but the final brushstroke of a thought process that we really started… Jim [Root, SLIPKNOT guitarist] and I talked about it a lot. We really started this sort of thinking on 'Vol. 3' [2004] and really picked it up — Jim and I were really able to pick up some sort of thought by creating [the unreleased SLIPKNOT album] 'Look Outside Your Window'; it was another avenue for he and I to work together. And then all of us have something to say. And I believe this is gonna be the last time that we have to feel like we have to get this thing out of us. And that's exciting. Because who knows what the future is then?

"So, is it different? They're all different," Clown added. "But they're SLIPKNOT. We search our souls, so we believe that you're gonna love it, because we love it, I guess. So, it's different. But I'll tell you: I've never heard Corey Taylor like this right now — I just never heard him like this. I feel full circle. I almost feel like we're giving homage to everything we grew up loving. I can hear so much of what I grew up, but it's my favorite singer singing. I can't say, 'Oh, you sound like this person or that person.' I feel like I'm a kid sneaking a beer at a KISS concert or something. I'm 14, 18, whatever… Let's not say sneaking. Let's say 21, and I go into a KISS concert at 21, and I'm having a beer. And I really feel like that right now. I'm having so much fun with the guys and just creating. We're so chill and relaxed because we've learned so much."

SLIPKNOT's latest album, "We Are Not Your Kind", came out in August 2019. The disc sold 118,000 equivalent album units in the U.S. in its first week of release to land at position No. 1 on the Billboard 200 chart. Furthermore, the album made an impact worldwide with No. 1 debuts in the United Kingdom, Mexico, Australia, Canada, Japan, Ireland, Belgium, Portugal and Finland, as well as Top 5 debuts in Germany, France, Norway, Italy, Austria, Sweden, Switzerland, The Netherlands, Poland, Spain and New Zealand.