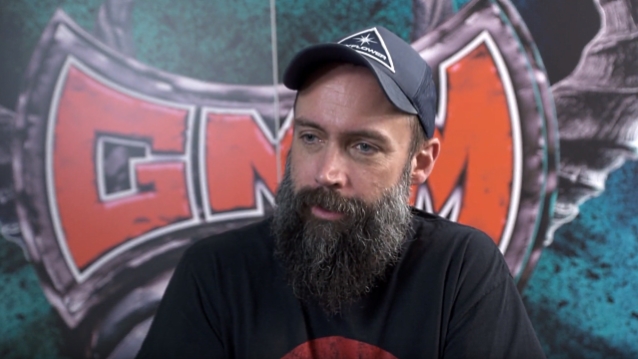 CLUTCH Vocalist On CARMINE APPICE's Praise For 'Evil' Cover: 'That Was Very Gratifying'

Prior to CLUTCH's performance at this year's Graspop Metal Meeting in Dessel, Belgium, vocalist Neil Fallon was interviewed backstage. The full conversation can be seen below. A few excerpts follow (as transcribed by BLABBERMOUTH.NET).

On whether the band's recently released cover of of the Willie Dixon 1950s classic "Evil" (later recorded by CACTUS) means that a new record is imminent:

Neil: "We did a tour in the States, and we had a quite a bit of time off [afterward]. We recorded some songs that we're going to be releasing throughout the summer. We've got a couple of U.S. tours and then [will be] coming back to Europe in December, so I don't think we're going to be working on a new record any time in the immediate future, but hopefully this time next year, we'll be well on our way... We were home for a while, and that was great, but we kind of got bored and were, like, 'What do we do?' It's kind of good to learn cover songs, because it's a bit like going to school — like, 'Why would they write this riff this way, or make this decision?' It's a good way to keep busy and put music out there instead of waiting for a whole album to come out again... We're releasing these songs digitally and streaming them, but that's not to say that we won't put that on a physical copy down the line once we get enough of them. It's sort of an experiment to see how this works out."

On the fact that drummer Carmine Appice, who performed on CACTUS's version of "Evil", praised CLUTCH's cover:

Neil: "That was very gratifying to get approval from the man himself."

Neil: "To be honest, that's pretty much what I listen to at home in my free time, so anything you listen to is going to be an influence. As I get older, I appreciate those historic acts more and more, because you can trace back the lineage even from an extreme metal band doing blast beats right now to one guy with a source. I think going to the source is always more inspiring than the peers — not that I think contemporaries are bad, but I like the old recordings. They're kind of mysterious."

Neil: "The Internet, I think a lot of people have complained that it maybe ruined the traditional music industry, but the thing is, there are so many artists out there that I have encountered because [of] YouTube or someone sending me a link, and it just opened up this whole world that I wouldn't have been able to listen to otherwise. I feel like there's a lot of homework that I need to do, listening to this stuff. It's just fun, really."

Neil: "CLUTCH writes riffs the exact same way we did when we were in high school together. We just jam, and then something cool happens accidentally, and the other guys say, 'Hey, what was that?', and then try to recreate it. Sometimes you can't. I think the democracy that we are, hopefully, the sum is greater than the parts. If you have an idea, it's kind of boring if you want it just to be exactly as you envisioned it. It's when things change, and Jean-Paul [Gaster] puts a beat on it and all of a sudden, the one gets turned around. That's the fun part — the unexpected."

On the band's evolution:

Neil: "Our very early material, we were teenagers, and I think most teenagers — and we're no exception — have a very narrow view of what their music should be. Hopefully, as you get older, you learn more and are willing try things. I can't imagine what it would be like trying to do 12 different versions of 'Transnational Speedway League'. I would lose my mind. I think CLUTCH fans kind of like it when we do something that's a little different, and if you don't like the new stuff, that's okay — I'm not crying. We do this for ourselves."

On how playing a song live can transform it:

Neil: "We're thinking about re-recording some old songs because of that. It's changed. I know I can sing a lot of these songs better. One thing we've learned is that it's always best to write a song and play it live as many times as you can before you hit the record button. The songs that we wrote in the studio, like, the day before we recorded it, there's countless things I would want to change, because I didn't have the luxury of practicing it over and over again. It's our music, so if we want to re-record it, who's to say no?"

On whether fans should expect new material from side projects THE BAKERTON GROUP and THE COMPANY BAND:

Neil: "I don't see that happening. Those were great fun, but CLUTCH is kind of on a roll right now, and you kind of have to, when the opportunity presents itself, keep going. CLUTCH is the number one priority, and I don't see how we could do that. But you never know. Those guys write more songs than I could possibly write lyrics to. That's one of the reasons THE BAKERTON GROUP existed — [They said], 'Okay, we wrote 20 songs,' and I'm like, 'I've got two ideas."

CLUTCH continues to tour in support of its latest album, "Book Of Bad Decisions", which was released in September via the band's own Weathermaker Music.