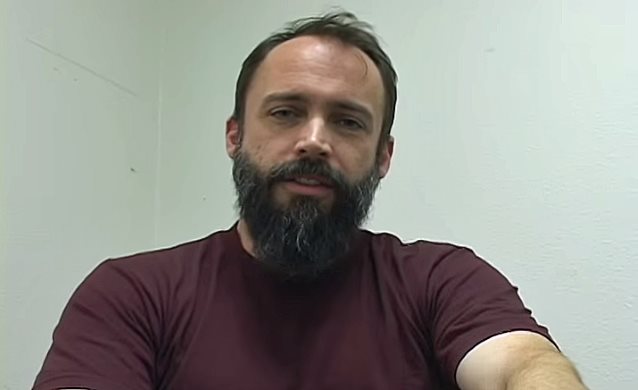 CLUTCH's NEIL FALLON: 'We're Not Trying To Turn This Band Into Some Multi-Platinum Wonder Story'

Casey and Bree Henry of Motorcityblog conducted an interview with vocalist Neil Fallon of Maryland rockers CLUTCH on May 23 at Freedom Hill Amphitheater in Sterling Heights, Michigan. You can now watch the chat below.

Asked how he accounts for the success of CLUTCH's last album, 2013's "Earth Rocker", Fallon said: "CLUTCH charting on Billboard and being No. 1 on iTunes is also indicative of anemic album sales in general. That wouldn't have happened fifteen years ago… competing with CD sales. But because of the Internet, and because of us kind of taking control of what we do, we're not trying to turn this band into some multi-platinum wonder story. We sell the right amount of records to the right people, and slowly over time, that number gets bigger and bigger and bigger. It's not because we figured out how to write a Karen Carpenter song. So I think that has a lot to do with it. It's a lot of hard work, and also [you need] a bit of luck [while being] at the right place at the right time. And also, at the end of the day, they're good songs, 'cause if the songs suck, there's really nothing to discuss. So that's at least how I think about it."

Asked if he would ever sign with a major label again, Fallon said: "Absolutely not. I mean, I still run into people… When they'd say, 'What label are you on?' and we say, 'Oh, we put out our own records,' and they look at you, like, 'Ohhhh. Sorry.' There's this stigma — that if you put out your own records, that is an admission of some kind of failure because you're not indentured to some major label. Why a band would sign a multi-album contract in this day and age is beyond me. And it cuts out a lot of middle men. It makes the process easier and more economical. If something goes wrong, we know who to blame; we go to ourselves and say, 'What can we fix?' It's a bit schizophrenic. We used to argue with labels. Now we have to kind of argue amongst ourselves — not literally, but make these decisions: How many do you wanna press up? How big do you want the album package to be? When do you wanna release it in conjunction with your tour? But I think, all together, we have decent business sense."

CLUTCH's new album, "Psychic Warfare", is tentatively due in September via the band's own label, Weathermaker Music. Songtitles set to appear on the follow-up to "Earth Rocker" include "X-Ray Visions", "Firebird", "Quick Death In Texas", "Our Lady Of Electric Lights", "Monsters", "Decapitation Blues" and "Son Of Virginia".