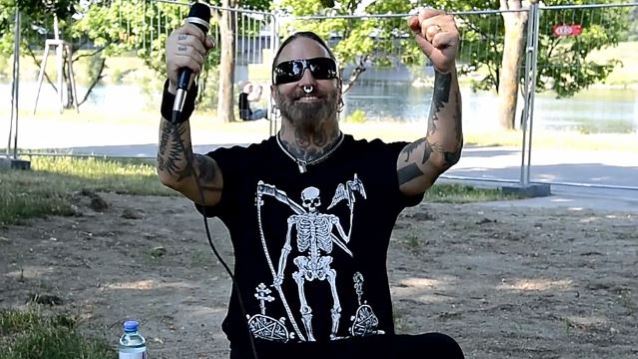 On June 6, Austria's Stormbringer webzine conducted an interview with vocalist Dez Fafara of COAL CHAMBER and DEVILDRIVER at the Rock In Vienna festival. You can now watch the chat below.

Asked how me manages to stay so angry in his lyrics as he approaches the half-century mark, Dez responded: "You know, man, it's not so much anger, you know?! It's really a lot of emotions, and a lot of different emotions. Like, someone will say to me, 'Well, this song sounds angry,' and I'll say, 'No, listen to it. [COAL CHAMBER's] 'The Bridges You Burn', it's not angry; it's sad. It's like telling somebody, 'I'm sad the way you live your life.' So you can't always mistake lyrics for being angry, 'cause they're coming through metal. I could sing the same lyrics through jazz and you wouldn't feel like it was angry. But since it's coming out heavy and crazy, it's, like, 'Oh, it's angry.' No."

He continued: "I'm very passionate about life. I have a million rooms in my head and in the house [that] anytime I want, I can access and get song content, really. And age is a real undefined thing for me. I mean, I bomb hills on skateboards with my kids, and there's no real… I don't feel any different than when I was 25. I mean, I don't. But the aches and the pains and all this shit hasn't set in. I live a good lifestyle; I live very healthy. I do yoga. I've been married for twenty years — a very happy marriage. [We have] great children, so I'm very blessed. And I think that's what makes age youthful — when you're happy. So I'm a very happy guy."

"Rivals, the comeback album from COAL CHAMBER, sold around 7,100 copies in the United States in its first week of release to land at position No. 80 on The Billboard 200 chart (which includes stream activity). The band's first CD in over thirteen years, which released on May 19 North America via Napalm, was recorded in part at Audiohammer studio in Sanford, Florida with producer Mark Lewis (DEVILDRIVER, CANNIBAL CORPSE).