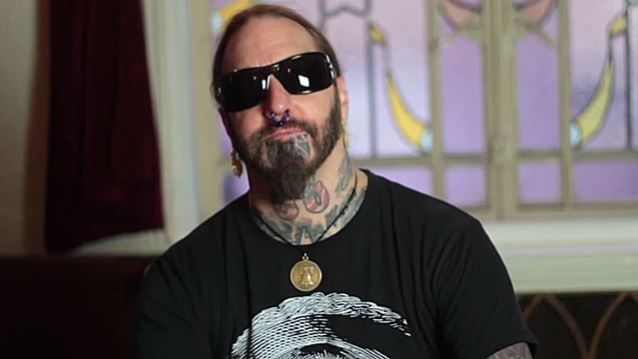 On March 27, COAL CHAMBER frontman Dez Fafara was interviewed by El Prezidente of "The Chainsaw Symphony" radio program in Niagara Falls, New York. You can now listen to the chat in the YouTube clip below.

Asked if he thinks "nu metal" has become a "dirty word," like "hair metal" was, Fafara responded: "I think 'hair metal' was cheesy. [But] I think 'nu metal' was different. I think what's beautiful about 'nu metal' is it's different. And you've got so many different influences. Look at the biggest bands on the planet right now: SLIPKNOT, DEFTONES, SYSTEM OF A DOWN… I mean, I could go on endlessly with our peers that have never gone away that have still stuck to that same formula. And I think there's this generation now of not only 15-to-17-year-olds but even [people who are between] 20 and 30, why they go back to that music and listen to it, or why they would even wanna listen to a new COAL CHAMBER record is they know it's gonna be something different. And that's what was beautiful about that time and era and that music —there was so many different influences to that music. You know, COAL CHAMBER has this metal influence along with this BAUHAUS and goth kind of thing with us. Then you've got KORN [who've] got kind of a rap influence with their thing."

He continued: "I think what you're gonna see, especially in the future, and I've seen it on the road now, especially with the meet-and-greets and the younger fans coming to the shows is that they're [getting into] the music that's different, because what's happening now in and around the heavy music scene is truly — and I have my ear to the ground; I hear every new band comes up, from demos to new releases — I think a lot of the stuff is sounding awfully the same. And that's pretty sad… You're not gonna get that with any of the so-called 'nu metal' bands or COAL CHAMBER whatsoever; you're gonna get something totally separate from other music. And, after all, isn't that what music is all about? It's supposed to be special and different."

Fafara added: "They they called it 'nu metal' is because it damn well was. When we came out of Hollywood, the 'hair metal' bands totally killed the scene. The Roxy, the Whisky… nobody was drawing anybody. And here comes COAL CHAMBER, here comes the DEFTONES, selling out shows. The Roxy, the Whisky… Here you've got this new scene — 'nu metal,' cause it was heavy shit. But I think the term 'nu metal 'is almost, like, pretty badass. Because you're doing something new within a genre that existed forever and is heavy as hell, but it sounds newer and [with] newer influences."

COAL CHAMBER's comeback album, "Rivals, will be released on May 19 North America via Napalm. The band's first CD in over thirteen years was recorded in part at Audiohammer studio in Sanford, Florida with producer Mark Lewis (DEVILDRIVER, CANNIBAL CORPSE).