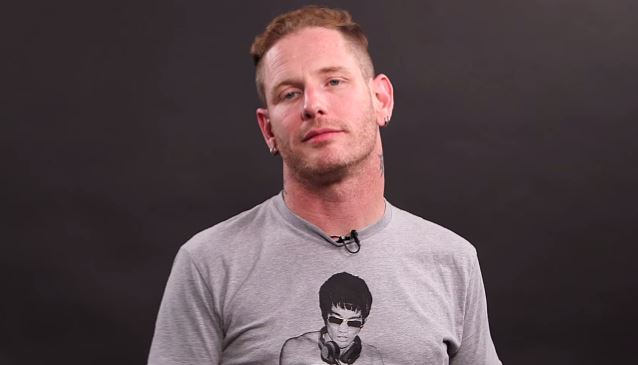 Corey Taylor of SLIPKNOT and STONE SOUR was the singer that came "closest" to replacing Scott Weiland in VELVET REVOLVER, but he was eventually ruled out of the running by Slash, who felt that Corey's voice "didn't have certain elements" the guitarist thought it needed.

While the team-up of Taylor with VELVET REVOLVER never officially took off, VELVET guitarist Slash did confirm that the band got together with Taylor to jam and even record some new material.

During the latest installment of Loudwire's "Wikipedia: Fact Or Fiction?" segment, Corey was asked about the music he reportedly wrote and recorded with VELVET REVOLVER and whether the recordings will ever see the light of day.

"I think it was ten [songs that I recorded with VELVET REVOLVER]… I think it was… It's either nine or ten," Taylor said (see video below). "There was a handful that we wrote, and then there was a handful that I kind of rearranged a little bit based on music that they already had. So it wasn't music that we kind of wrote together. I mean, there were, like, three… I think there was three songs that we wrote together, which were actually pretty sweet. And then the rest of it was me writing to music that they already had that I thought was pretty cool."

He continued: "Yeah, the world will probably never hear 'em, which is fine, because, I mean, I would want another crack at kind of working on some of that stuff anyway. But that will never happen, so it's…. You know, it's all good."

Last October, Slash was asked during a question-and-answer session with Australia's Rolling Stone magazine why Taylor and former SKID ROW singer Sebastian Bach weren't the right singers for VELVET REVOLVER, and which vocalist came closest to replacing Weiland, Slash said: "Well, Sebastian [auditioned for the VELVET REVOLVER singer spot] before Scott [became a member of the band]. And I love Sebastian, but, if you can imagine, it sounded sort of like 'SKID N' ROSES.' It was cool, but you knew that everybody who heard it was gonna be, like, 'Oh, yeah, that makes sense.' It was a little bit too predictable. But as far as [vocalists that we have auditioned] since Scott [was dismissed from the band], probably [the one that came] the closest [to landing the gig] would have to be Corey, 'cause everybody was rallying for him. And I love Corey to death, but something about it was just a little bit too… What's the word for it? You know how Corey sings. It's a very macho kind of thing. But it didn't have certain elements I thought it needed. So we just didn't go down that path. And that was the closest so far."

Back in January 2012, Taylor was asked by ESPN.com what he felt he would have brought to the VELVET REVOLVER team had he quarterbacked it. Taylor replied: "What I would have brought to VELVET REVOLVER would have been more of the attitude that I think they wanted from Scott, but they got the negative side of it, you know what I'm saying? Scott, to me, has always been the guy who — he's much more interesting when he's being a dick to other people than he is onstage, to be honest. I mean, he does the lizard weird-thing-dance and everything, but that gets old after a while. When you need that strong frontman, he just really didn't do it because he was too busy just being into himself instead of engaging the audience."

Slash admitted in an interview that he was the main reason Taylor didn't get the frontman job, explaining, "It just didn't seem to fit right to me. And he's great, and I love Corey, but it didn't seem like the answer to the VELVET REVOLVER problem."

Taylor told a Canadian radio station after hearing of Slash's comments, "I guess it just wasn't working for him, which... He's Slash and he's entitled to have that, and I'm not gonna argue with him. But it was cool to just be able to get together and jam with those guys and I made some really cool friends."