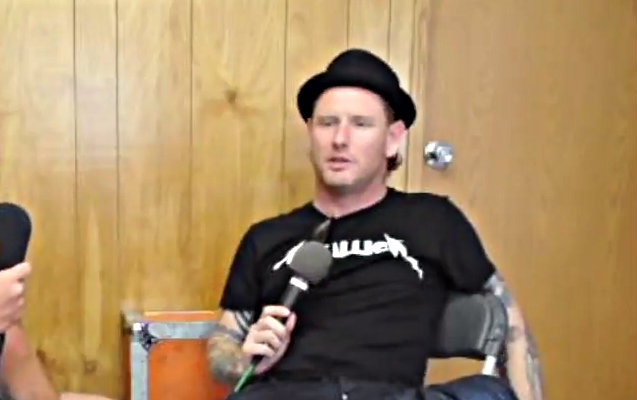 Cutter of Razor 94.7 conducted an interview with SLIPKNOT and STONE SOUR singer Corey Taylor prior to the latter band's July 15 performance at the Rock USA festival in Oshkosh, Wisconsin. You can now watch the chat below.

Asked how he is doing physically, about thirteen months after he underwent emergency spinal surgery when it was discovered that he had been walking around for years with a broken neck, Taylor said: "I'm doing okay — slowly but surely making progress. I'm about at 95 percent. I had [the surgery] about a month or so after I quit smoking, so that's my grade. It is what it is. When you have a surgery like that, you can't do all the stuff that you usually do physically, so I gained a little bit of weight and stuff, so I've been trying to fight that off, and I'm kind of still trying to find that flexibility. But you'll see tonight — it's still a physical show. I've gotten it back for the most part, but I'm still working on it."

Taylor added that performing with STONE SOUR is not necessarily any less demanding than touring with SLIPKNOT. "We're running all over the stage, [doing] a lot of headbanging," the singer said. "I've got my swivel back, which is cool."

He continued: "Our goal is to be that crazy-attitude party band, like VAN HALEN. That's what we wanna be — that band that you come to see and have fun, and yet it's still tough, it's still got that attitude. That's what we're into."

STONE SOUR is touring in support of its new album, "Hydrograd", which rocketed on to the charts, debuting at No. 1 on three Billboard lists: Top Current Albums, Top Rock Albums and Top Hard Rock Albums. "Hydrograd" also debuted at No. 8 on the Billboard 200, marking the band’s fifth consecutive Top 10 debut on that chart. Furthermore, "Hydrograd" debuted at No. 5 in the U.K. (the band's highest debut ever in that country),No. 2 in Australia (highest debut ever),and was Top 5 in Germany, Japan and Switzerland.

STONE SOUR is currently on an epic summer trek alongside fellow Roadrunner recording group KORN. Dubbed "The Serenity Of Summer Tour", the trek is set to continue through early August.