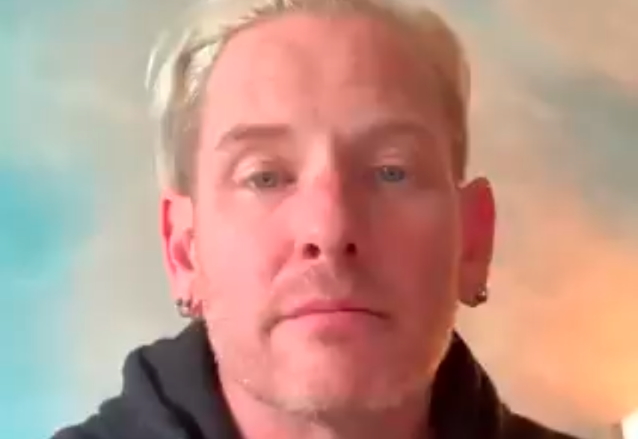 COREY TAYLOR On His Battle With COVID-19: 'This Is The Worst I've Ever Been Sick In My Life'

Corey Taylor says that contracting a breakthrough case of COVID-19 was "the worst" he has ever been sick in his life.

The 47-year-old SLIPKNOT and STONE SOUR singer was forced to call off his appearance at a Michigan pop culture convention this past weekend after testing positive for the coronavirus. Taylor first shared the news in a video posted Friday on the Facebook page for Astronomicon, the event where he was scheduled to appear Saturday and Sunday.

Earlier today, Taylor — who completed the latest leg of his solo tour in support of his 2020 album "CMFT" Thursday night (August 19) in Denver — took to his social media to offer an update on this condition. He said in a video message (as transcribed by BLABBERMOUTH.NET): "Hey everybody. I just wanted to give you an update. First of all, I hope everybody's well out there. Second, I am out of the woods. I'm still positive. But the fever's gone, aches are gone. I'm sweating everything out. I'm still congested. But I'm slowly but surely making my way. It shouldn't be too much longer before I test negative. So, I mean, that's great.

"I wanted to say thank you very much to everyone who sent their best wishes and to all my family and friends who reached out," he continued. "You have no idea how much that means to me.

"I also wanna say that because I was vaccinated, I truly believe that is what helped me get over the break. I mean, this is the worst I've ever been sick in my life. Had I not been vaccinated, I shudder to think how bad it would have been. But because I had that extra little bit of protection, man, it definitely helped me get through it. So — go, go, go. If you're still on the fence [about getting the vaccine], I'm telling you right now it's the best thing you can do for yourself.

"Count the days down, and hopefully I will see you guys soon," Corey added. "All right? Take care of yourselves. Stay safe."

Taylor and the rest of SLIPKNOT are scheduled to perform at the Rocklahoma festival on September 3, to be followed by appearances at Ohio's Inkcarceration Fest and Chicago's Riot Fest as well as a U.S. headlining tour this fall.

Just a little update on how I’m recovering. Thanks so much to everyone who sent their best wishes and to friends and family who reached out. pic.twitter.com/haWwWZbdN3