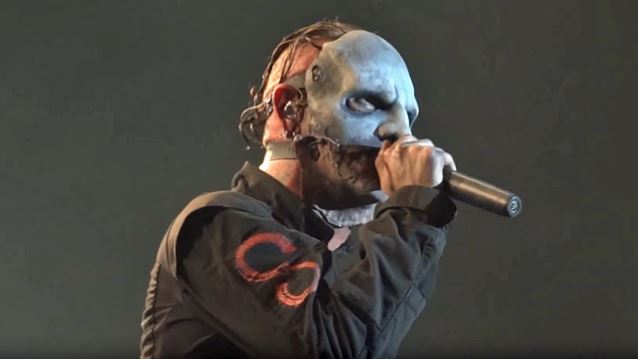 COREY TAYLOR On SLIPKNOT: At Some Point, The Music Will Have To Evolve And Become Something New

SLIPKNOT and STONE SOUR frontman Corey Taylor was interviewed on the April 22-24 edition of Full Metal Jackie's nationally syndicated radio show. You can now listen to the chat using the Podbean widget below. A few excerpts follow.

Full Metal Jackie: How do you now envision the continuation of SLIPKNOT's evolution compared to what you imagined on tour supporting the first album?

Corey: "It's funny you ask that, because it's something that me and Clown [SLIPKNOT percussionist] and Jim [Root, SLIPKNOT guitarist] have kind of been talking about for a couple of months now. Like, where do we go? I mean, this band has always tried to find the path less traveled. We've always tried to expand the range of the music that we're making and find new ways to speak our piece, find new ways to kind of push our agenda and our message. And it's getting to the point where, at some point, the music will have to evolve. And I think from day one until this album, it has. We've done really great things to broaden our musical horizons. At the same time, though, at some point it's gonna have to twist and it's gonna have to change even more, because when does the war end? When do you win the battle? When does that fight stop, as far as the internal fight, the internal war, that internal rage? When do you feel like you've said everything you need to say on that subject? I'm not saying that things aren't gonna come around in my life and continue to piss me off, but, for me, I don't wanna be considered the old guy who's just bitching to hear himself bitch; I don't ever wanna feel like that. So at some point, the message and the approach has to change. Now, will it still feel like SLIPKNOT? Absolutely. We write a certain type of music, even though that music may be very, very eclectic and varied, we still write what I consider SLIPKNOT music. But at some point, that will have to evolve and become something new, because our message will have to change. You can't keep trying to beat yourself up or beat somebody else up if you've already done it. That old adage 'flogging a dead horse' comes to mind. And it's true. But if you'd asked me that when I was 25, I would have told you [that] you were crazy. But now I'm 42, and looking down the road as far as what musically SLIPKNOT is going to mean, it's interesting. There's a world of possibilities that we can look into."

Full Metal Jackie: The SLIPKNOT / MARILYN MANSON tour was recently announced and it's a pretty tremendous lineup, if I do say so.

Corey: "I'm not really sure, to be honest. I would have to give props to Manson for coming before us, to be honest. So I would say he's maybe flown the flag longer, but I think we're both on the same page as far as… not necessarily being subversive, but being unafraid to speak our minds, being unafraid to create the type of music that we wanna create and say the kind of things that we wanna say, whether that is popular or not. And I think that's where we're kind of on equal ground. We don't hold anything back when it comes to our message and what we try to share with our fans. And I think that's why this band is… this bill will definitely work really well."

Full Metal Jackie: When people ask your opinion about politics, racism or any other hot topic issue, how much responsibility do you feel, rightly or wrongly, that your response will likely affect someone else's opinion based solely on the celebrity factor.

Corey: "Well, I mean, it's a slippery slope these days, you know? [Laughs] On one hand, people genuinely wanna know how you feel about certain things, because maybe they're having trouble figuring it out for themselves and they respect your opinion, or they just wanna ask you the question so they can react to it with their own opinion. So, really, it is what it is. All you can do is just kind of stand up for your opinions, stand up for what you believe, and stand up for what you feel. And that's really… That has to be the end of where your responsibility ends. I'm not going out and campaigning for anybody. I just know who looks the most… I don't wanna say politically correct, but I know who I support just based off of the vibe that I get and the things that these people say and the things that they're trying to fight for. I tend to go for the people who I feel have that moral high ground, I guess is the only way to put it. So that's who I tend to try to support. People can disagree, or agree, with me all day; it doesn't mean I'm gonna change my mind."

Full Metal Jackie: I have to imagine you always have one billion things going on in your life, so I have to know what you've got planned beyond this tour.

Corey: "I'm doing rehearsals with STONE SOUR. We're working on new material for another album. I've actually just started working on my fourth book called 'America 51', which my publisher is gagging for right now, just because of the state of nation. It's almost too appropriate. I've got a handful of acting gigs that I'm gonna do. I can't tell you yet, because it's kind of a surprise. It was a surprise for me when I got offered it, so let's put it that way. Yeah, I've got a bunch of stuff on the horizon that I'm looking to do, especially on the times off between tours. So, my year is packed with a bunch of good stuff."