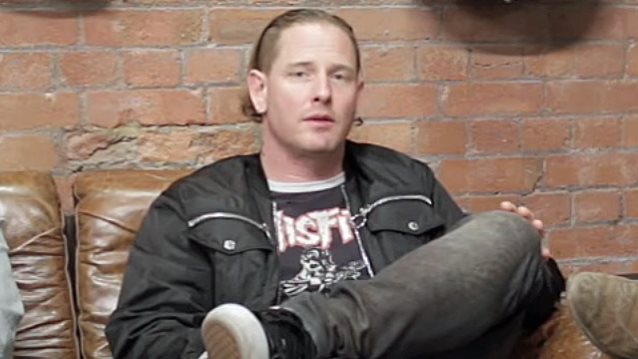 COREY TAYLOR On STONE SOUR: 'You Can't Suck And Be In This Band'

Ticketmaster U.K. recently conducted an interview with STONE SOUR vocalist Corey Taylor and guitarist Josh Rand. You can watch the full chat below. A few excerpts follow (transcribed by BLABBERMOUTH.NET).

On the meaning of "Hydrograd", the title of the band's forthcoming studio album:

Corey: "It's a funny story, actually. A few years ago, and I was running through an airport, I think it was in Poland, maybe. It was before they upgraded everything, so everything was a little antiquated as far as the gate information, at each gate. It still had the LED, '80s digital watch, box-y numbers, letters and things going by. It switched between English [and something else] and I'm running, trying to find my gate and I kinda happened to look up. You get those subliminal flashes of what's going on. And I saw 'Hydrograd.' I kept going and I was like, 'I wonder what that word is in Russia?' I stopped and I was like, 'I got to know. I have to know where that is.' I go back to the gate and it wasn't even close. There was no word that actually looked like 'hydrograd' or sounded like 'hydrograd.' It was kinda funny; I just chuckled and went on and I just went 'Hydrograd,' huh. That's a cool name.' I tucked it away. Years later, lo and behold, I had written a song that I named 'Hydrograd.' I thought it could be a really cool name for the album. The rest is history."

On whether there is a lyrical theme running through "Hydrograd":

Corey: "Not really. Thematically, it's more about just how the songs feel than anything else. We just wanted to put together a solid album that just felt really good, like almost like a rock playlist. You put your favorites together and let it flow after that. That's kinda what this album has, that flow. Thematically, it's just like any other album, really, where it's talking about life, love, anger and stuff, and all the crap that goes with it."

On the "eclectic" nature of STONE SOUR's music:

Corey: "We've always said that there's cohesion in our eccentricities. This album really allowed us to explore a lot of different types, but at the same time, there was a cohesion that maybe it wasn't as pulled apart as some of our other albums are. It felt really good and linear and song-wise, we were just kicking a lot of ass with that, too."

On recreating STONE SOUR's live sound in the studio:

Corey: "You can't suck and be in this band, let's put it that way. We've always been that band where we've always felt like we haven't been able to capture ourselves on an album yet. We always prided ourselves on being an amazing live band. This album, I feel like is the first time in a long time that we've captured the spirit of where we are live. It's because we recorded it live and really went for it. You can hear that in every listen. It doesn't deteriorate. Every listen it sounds fresh and sounds good. It's exciting."

On whether the band is excited about touring again:

Corey: "Absolutely. Even smells and sights, yeah, dealing with all that crap. You get to a point where you're set in your ways. The road doesn't have a lot of the… I don't even know what the word is."

Josh: "Since I've been removed from it for a while this time, this is the longest break that we've ever had since 'House Of Gold & Bones [Part 1 and 2]'. Part of me is nervous. To go back out there, even doing the interviews, it's, like, 'I haven't done this for four years.' It's like getting back into the swing of things. I'm really excited. I think the record is great. It will be amazing to play some of that stuff live, and go back to all these places [where] it's been years since the band has been there. For me, personally, there's definitely an excitement and I'm kind of nervous at the same time. It's like a rediscovery of just doing this all over again, being able to start over, it's like being a young band. That's how I felt, literally, a couple of days ago. I was like, 'Wow, we've been doing this forever.' I remember back just getting ready to do this press tour, so yeah, I'm stoked. I think the break, obviously in the situation that we are in this band with him [Corey] singing in SLIPKNOT also, so we always have that break. Every time from when the band first started, everybody asks me about 'the break' and what I think of it. I've always really embraced 'the break.' I think every time that it does come back around, it's like starting all over again. It's not that I'm completely burnt out because we've done it ten years non-stop. I can come back to it and it's fresh, then it becomes exciting again."

Corey: "And you can burn out quick, even when you love something, it gets to a point where it can make you feel like this is beating you down. For us, being able to re-discover that energy and re-discover that love for it, you can see it in the live performance. You're so into it. You're just ready to give it everything you got. It never comes off as lackadaisical."

"Hydrograd" will be released on June 30 via Roadrunner Records. The disc was recorded at Sphere Studios in North Hollywood, California with producer Jay Ruston, who has previously worked with ANTHRAX and STEEL PANTHER.

STONE SOUR will be special guests of KORN on the latter act's "Serenity Of Summer" trek, which starts on June 16 in Salt Lake City and wraps on August 2 in Cleveland.